In what could be a preview of a State D3 semifinal, No. 1 Shrewsbury edged Longmeadow, 3-2, in a meeting between the top team in Central Mass. and the top team in Western Mass. James Abbott’s goal 13:17 into the final period snapped a tie. The Colonials also got goals from Anthony and Liam Quinlivan.

No. 2 Wachusett defeated No. 4 Groton-Dunstable, 8-1. Jimmy Conway sparked the Mountaineers with a hat trick.

No. 3 North Middlesex moved up a couple of spots following its 4-2 decision over No. 6 Nashoba. Don Frederick had a goal and two assists, and Matthew Materas had a pair of helpers. Dan Kerble and Dean Anastas scored for Nashoba.

Nate Anderson scored  just before time expired at the end the first period to spark No. 5 Algonquin to a 4-1 win over Westboro. Algonquin got back on track after it lost  four of five games.

Noah Charron had a pair of goals to lift No. 9 Grafton to a 6-0 triumph over Northbridge. Cousins Jake Baker and Tyler Baker (who have combined for 30 points)  provided  power-play goals. Cam Powel recorded a 16-save shutout. 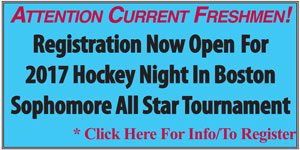 Grafton has not missed a beat despite graduating 10 seniors. Grafton’s only losses have come to D3 foes Minnechaug and Nashoba.

Sean Simpson netted the game-winner at 6:57 of the third period to lift No. 7 Lunenburg past Fitchburg.

Ben Bombard scored his second goal of the game 1:56 into the third period to lift No. 8 Worcester past Hopedale, 3-2.  Matthew Mahan had a goal and an assist.