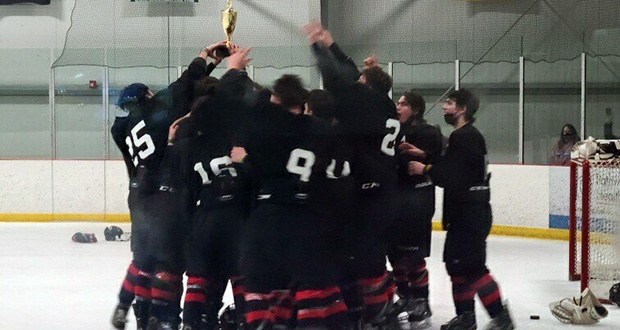 The Cardinals celebrate their Mass. Final Four Tournament title after defeating an impressive Red Army squad, 2-0, in the title game.

There is no question that the Cardinals possess some high-quality offensive players, but on this afternoon, outstanding defensive play proved to be the difference.

The Cardinals scored a pair of first half goals, and made them stand up to win the Mass. Final Four championship, blanking a good Red Army team, 2-0, in Sunday’s final game.

Red Army, with several top-notch offensive guys as well, had some offensive zone time, but weren’t able to get many quality chances on goal. And when they did, veteran netminder Ben Zaranek was there to make the save.

“As a team this was probably the best defensive game we have played,” said Zaranek. “I barely got any shots on goal. This was a team shutout.”

The Cardinals, which shut out Clergy 4-0 in Saturday’s semifinal, scored the only goal they would need at 14:36 of the first half. Jack Moltenbrey got it, banging home a nice feed from behind the net from Ryan Shaw.

Just under four minutes later, the Cardinals would score again. Winning an offensive zone faceoff, the puck came around to defenseman Matt Hanscom at the left point. Hanscom slid a short pass to Ryan Leonard who wheeled into the slot and fired a low wrister on goal. Red Army goalie Theo Jacobs made the stop, but Brandon Spaulding was there to pop home the rebound.

The 2-0 score held the rest of the way. Red Army pulled Jacobs for a sixth attacker, and had their best chance with 30 seconds remaining. But, Zaranek stoned Ryan Jacobs in front to keep the two-goal lead intact.

The Cardinals did have a bunch of chances to increase their lead on several occasions, but Jacobs stood tall in the Red Army cage. 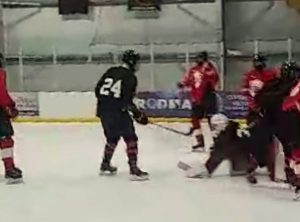 “He played awesome,” Zaranek said of his counterpart between the pipes. “I have nothing but respect for him.”

The Cardinals goalie was very happy with how the weekend turned out.

“These games really meant a lot,” Zaranek said. “Playing in games like these was great, and winning the championship was amazing.”

In the consolation game, fourth-seeded Clergy edged the second-seeded Blue Hawks, 2-1. Forward Christian Koylion scored both goals in the win. The game-winner came with just over four and a half minutes left.  Jake Curley had the lone goal for the Blue Hawks.