The Cardigan Mountain School, located in Canaan, NH, offers one of the premier pre-prep hockey programs around. Recently announced new head coach Cam McCusker, is an alum, having graduated from the school in 2010. McCusker also played in the prep ranks at St. Paul’s School, and collegiately at Wesleyan.

Here is a look at what the Cardigan Mountain School hockey program has to offer a student athlete in Grades 6-9:

Teaching boys the skills to succeed academically, socially, and athletically is the cornerstone of the Cardigan experience.

A boarding and day school for boys in grades 6-9, Cardigan Mountain School has been nurturing academic achievement as well as physical, social, ethical, and personal growth for 75 years.   Cardigan boys live in a supportive community, learn to advocate for themselves, and mature both intellectually and socially  during their formative years. With a student body of just over 200 boys from across the country and around the world, the student experience masterfully blends autonomy with the reliable guardrails of a community dedicated to the success of each student. 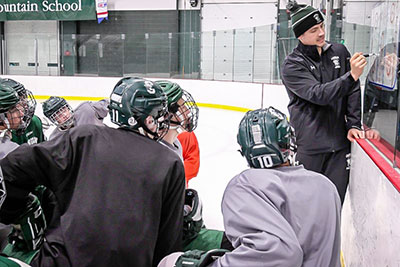 The Tradition of Cardigan Hockey

In a setting that is tailor-made for the growth and development of adolescent boys, there exists a tradition of ice hockey that has stood the test of time—and the proof is in the players. Student-athletes arrive on campus with all levels of skill and experience. Some arrive unpolished or lacking experience in skill development, while others have raw talent and a desire to advance their abilities. All students are able to progress their game and expand their hockey knowledge while at Cardigan.

Cardigan’s Hockey Program has traditionally consisted of four teams, providing knowledgeable and experienced coaching and competition for players of all abilities and experience levels. There is a hockey team at Cardigan for every student-athlete to play on and to gain valuable game experience ––riding the pine is not something you’ll find in the Cardigan Hockey Program. With a coaching staff replete with former college players and coaches, the level of instruction and guidance Cardigan players receive is unrivaled.

Cardigan graduates matriculate to some of the top secondary schools in New England and elsewhere, making notable contributions to their new schools and building on the skills, leadership, and teamwork instilled at Cardigan. Furthermore, a significant number of Cardigan alumni achieve athletic success at the collegiate level, with several continuing on through the professional and international ranks. 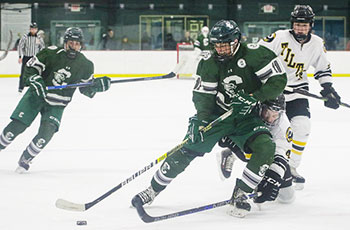 The Cardigan Mountain School has one of the premier pre-prep programs in the nation.

A Piece of the Whole

As Cardigan students participate in the school’s three-sport model, hockey is but one of the sports to which their athletic development is geared. With a hockey season spanning from November to March, the remainder of the athletic experience at Cardigan is spent training and competing in other sports. At no point does the monotony of an 80-game season with the fatigue of 9 months of travel take away from the Cardigan Hockey experience.  Subsequently, in a community designed to provide both challenge and support, Cardigan’s student-athletes are able to compete in athletics at a high-level without sacrificing the quality instruction that is provided each day in class (Monday-Saturday, 8:00-12:30).

At Cardigan, it is common for a student’s Algebra teacher to also be his lacrosse coach, or for an 8th grade English teacher to coach the Varsity Hockey Team. Cardigan faculty members serve as teachers, coaches, advisors and dorm parents, staying attuned to the goings-on of the student residential life experience. It is this intertwining of roles that creates the web of support for each Cardigan student, and which enables constant growth and development. The ability for Cardigan faculty to truly know each and every student allows for a maximized learning environment.

The hallway leading from the locker room to the ice in Turner Arena on Cardigan’s campus is adorned with the photos of alumni who have moved on from Cardigan and achieved success at some of the highest levels of hockey. While the walls certainly remind those at Cardigan that they are part of something bigger than themselves, they also serve as a testament to the legacy of Cardigan Hockey. Just as development is the goal for Cardigan’s players, the program itself continues with a growth mindset, seeking to balance world-class education and top-notch coaching in an environment dedicated to overall development.

The future of Cardigan Hockey is a bright one, characterized by intentional instruction to promote continued progress. The goal that Cardigan maintains across all levels of hockey is to develop each student-athlete into a better hockey player and an admirable young man. This has been—and will continue to be—accomplished through emphasis on character growth and team success, dedication to skill-building and game sense acquisition, and a deep understanding of each individual player.

In the era of showcase tournaments and the arms race of youth sports, Cardigan Hockey—like the school itself—remains steadfast in its commitment to individual growth in order to better serve student-athletes in the long run. When exposure is the only goal, development is sacrificed. When development is the main goal, exposure will follow as a byproduct of heightened play and maturity.

To learn more about the Cardigan Mountain School, go to www.cardigan.org