Alison Butler Does It For St. Mary’s Lynn

It certainly was a familiar foe for St. Mary’s, taking on league rival Arlington Catholic for the sixth time in the last two years, and second year in a row in the MIAA Division I championship game. And it was a familiar name that brought the Spartans to the title.

Senior captain Alison Butler put the finishing touches on a brilliant high school career, scoring on a 2- on-1 break with 2:46 remaining in regulation, giving St. Mary’s a 2-1 win over their Catholic Central League rival, and avenging a loss in last year’s state title game. On the game-winner, Butler chipped the puck past an AC player at the blue line to create the odd-man rush. Then, as a Cougars’ defenseman took away the pass to Madison Molea, Butler fired home a blistering wrist shot to the lower far corner to break a 1-1 deadlock. It was Butler’s 199th career point.

“I got on her a bit after the second period,” said St. Mary’s coach Frank Pagliuca. “I didn’t think she was playing as well as she is capable of. I think she is the best player in the state. She got her opportunity and she buried it.” St. Mary’s grabbed a 1-0 lead late in the first period. Senior Gabby Crugnale went coast-to-coast with the puck, cut into the slot from the off wing and whistled home a wrist shot over the right pad of Arlington Catholic goalie Megan Messuri. 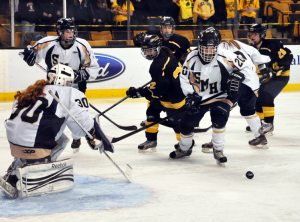 Sarah Ryan drew an assist on the play. It stayed a 1-0 game until the third period. The Cougars had a golden opportunity to tie the game late in the second as after St. Mary’s defensemen Vanessa Van Buskirk (tripping at 12:26) and Tatiana Doucette (holding at 13:22) drew penalties, AC had a two-man advantage for 34 seconds. Pagliuca called a timeout at that juncture, and St. Mary’s was able to kill off the disadvantage, with goalie Lauren Skinnion making a couple of nice saves. “That was a huge kill for us,” Pagliuca said. “I called a timeout to settle things down and get my players some rest. You don’t want to burn your timeout that early, but I felt I needed to at that time. Skinnion was unbelievable during the 5-on- 3.”

Arlington Catholic finally drew even early in the third period. While shorthanded, Jessica Piracini corralled the puck in the St. Mary’s zone and drove to the net. Skinnion stopped her bid, but Adrieanna Rossini was there to backhand home the loose puck to make it a 1-1 game. That set the stage for Butler’s heroics. “Arlington Catholic is a great team and is very deep at forward,” Pagliuca said. “We knew we would have our hands full and that it would be a coin-flip type of game.”

Previous: Westfield Gets The Better Of Swampscott
Next: Three In A Row For Duxbury