A big incoming class could mean some more success this winter for the Cadets, who strive to be hard to play against and be a fast team, moving the puck quickly.

In goal, post-grad Kyle Penton will challenge for the top spot between the pipes.

The Bears hope to build on the success they had at the end of last season, where they won six of their final eight tilts. This year’s team will be young, but with some experience. 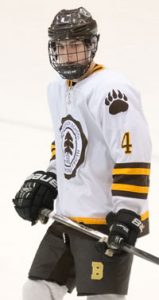 On defense, junior Cade Alami should be a major factor; he has committed to Providence. Seniors Aidan Metcalfe and John Pratt are back as well. Post-grads Jake Lachance and Elias Cohen, new junior Max O’Brien and freshman Nick Donaldson bring their talents.

Sophomore Jed Ballotti saw a little time in the Berkshire cage as a ninth grader last winter. Post-grad Ken Burgess joins the club in the nets as well.

A playoff team the past four seasons, the Bruins capped the run winning the New England Large School title last year, ousting Thayer 4-3 in OT. This year’s club will be defense-oriented. Longtime assistant Michael Kennedy has taken over the head coaching job, with Ron VanBelle who had been head coach for 13 seasons, serving as an assistant. 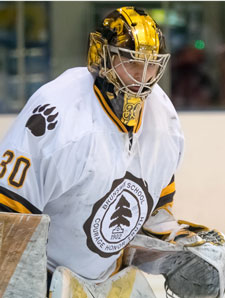 Senior book-ends Cooper Moore (21 pts) and Henry Hill will be crucial to the Bruins defense. Junior Shayan Farjam is another expereinced blue liner. A pair of new juniors – Jude Brower and Connor Sullivan – give the group even more depth.

Also back is senior goalie Dan Dachille, who fashioned a 2.15 gaa in over 1,500 minutes of action last year.

Attitude and effort will be keys this winter for the Saints, who project to be young on defense and have some inexperience up front.

Seniors Matt Iasenza (20 pts) and Raif Harris (10 pts) will be asked the carry the offensive load for coach Paddy McCarty, along with junior Zach Riccitelli (14 pts).

In goal, senior Connor Cherry is the only returner. He will look to win the #1 job during the pre-season. 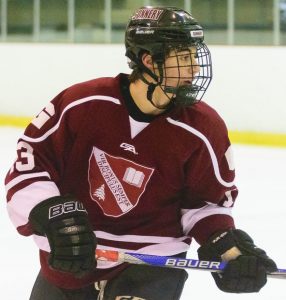 Depth up and down the lineup will be a big plus for the Highlanders, who reached the Small School semifinals a year ago, losing a tough OT game to eventual champion Lawrence Academy. With that depth, coach Craig Badger says that team chemistry will be vital. 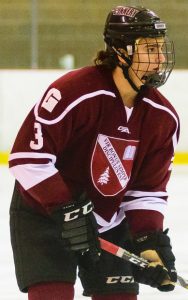 Senior JP Mella saw the vast majority of time in goal last winter for Gunnery and returns for another big year. Junior Carmine Andranovich is also back in the fold.

A beefed up schedule greets the Owls as they embark on the 2018-2019 season. New head coach Tim Wolford, who says system play and simple, smart hockey will be his teams bread-and-butter this winter. Last year’s head coach – Brett Heigl – is now Hoosac’s Associate Head Coach.

Despite losing some key players, Millbrook coach Vincent Sorriento feels good about his returning group and his new players, and is both excited and optimistic about the upcoming campaign.

The Mustangs do bring back three forwards who will be huge to any success in senior Jake Gagnon (45 pts), senior Jason Ruskowski (15 pts) and senior Ryan Pitoscia (14 pts).  The new guys ready to make an immediate impact are seniors Ethan Abraham and Andrew Peters, junior Kyle Neudorf and sophomore Griffin Tominez. 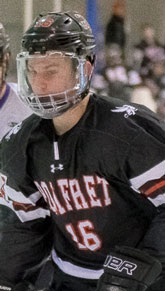 Backboning the defense is senior Owen Nolan (25 pts), who has committed to Army. Seniors Stu Martin and Dilan Peters return as well. New junior Nick Degaetanni should have a big role.

Returning senior starter Cam Fernandez will be a solid presence in goal. New sophomore Owen Haines is in the rotation.

The Griffins stumbled a bit last winter after winning the New England Small School title in 2017. Things look promising this year, with a lot of depth on the roster. 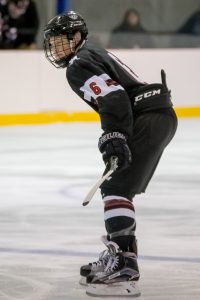 Senior Peyton Durand gives the Griffins a chance each and every time out between the pipes.

The Wildcats fared quite well last season in their Fairchester Athletic Association, but have some holes to fill this year.

Only seven players return from last year’s outfit that got the #4 seed in the Large School Tournament. So, you can say that coach Derek Cunha has his work cut out for him. He did bring in a solid new group.

Senior captain Tim Rego (15 pts) is a veteran presence on the Williston blue line. Senior Alex Berg will be an anchor along with Rego. Newcomers hoping to make a splash are junior Mitchell Hansen and sophomores Tyler Varin, Zach Gmerek and Hunter Wilson.