Although four new teams that were not in our preseason ranking made this the first in-season HNIB News Boys Prep Top 15, there is no change at the top. 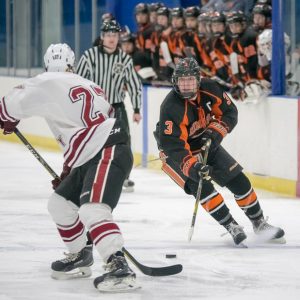 Preseason #1 Salisbury (8-0-1) and #2 Kimball Union (9-1-1) stayed put. The two heavyweights squared off over the weekend at the Flood Marr Tournament, and skated to a 2-2 standoff.

Both teams went 3-0-1 in their bracket, but the Wildcats got to play for the tournament title, which they won with a 4-2 verdict of previously unbeaten Westminster. The Crimson Knights knocked off host Nobles to earn third place in the tournament.

Rivers (6-0-1) jumped up seven spots to #3 after taking the St. Sebastian’s Tournament, beating the hosts 3-2 in overtime on  a Tyler Capello game-winner. The Redwings had a lot of offense to replace from last year’s Elite Tournament finalist, but so far have been fine.

At #4 Westminster (6-1-0) is the first of the four teams that did not appear in our preseason rankings. The Martlets have been very impressive so far and gave KUA all it could handle in Sunday’s Flood Marr final. 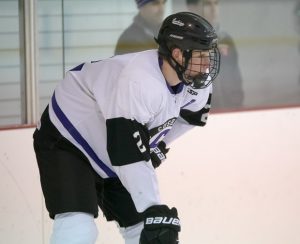 Also impressive has been #5 Cushing (8-1-1). The Penguins jumped up six spots in the poll and are coming off a championship at the Lawrence/Groton tournament, where defenseman Nolan McElhaney took home tourney MVP honors.

#6 Phillips Exeter (7-1-1) has lost just once, a head-scratching 6-0 setback to #12 St. Sebastian’s. The Big Red face off against Thayer Tuesday at Warrior Arena in Boston.

Other teams debuting in the poll this week are #11 Milton Academy (5-2-0), whose only two losses are to Salisbury and Kimball Union, #13 Northfield Mt. Hermon (7-1-2), which fell in overtime in the Lawrenceville Tournament title game against Nichols, and #15 Winchendon (3-1-2), which has lost just once in six outings.