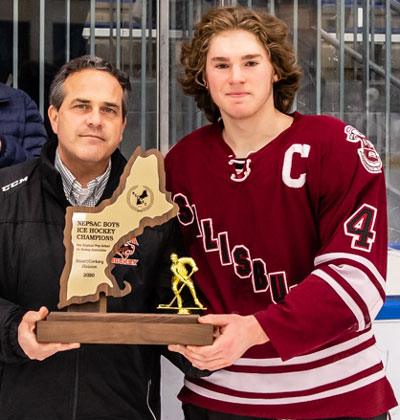 The third time was the charm for Salisbury.

It’s the first Elite 8 title for Salisbury since 2015.

“The whole thing for us today was we wanted to play a disciplined, composed game,” said Salisbury coach Andrew Will. “We didn’t want to give them power play opportunities or an emotional edge, and I thought for the most part we did that. We knew if we wanted to get back to the top of the mountain we’d have to sacrifice and we had guys in the room sacrifice self for team all season long.

“It’s so hard to win this. There’s so many good teams and so many things have to come together with your team and then you’ve got to go out and perform. We’ve been in the championship games the last two years and been on the other side, so for our guys to find a way to finally end up on top is just so exciting and we’re so proud of our guys.”

In the quarterfinals, Salisbury found itself down three goals to three-time defending champ Kimball Union, only to rally for a 7-4 win. On Saturday, the Knights won a 4-3 overtime barnburner of second-seeded Avon Old Farms.

Right from the opening puck drop Salisbury wasn’t going to be denied. Just 2:05 into the game Massimo Lombardi ripped a laser past Dylan Silverstein (22 saves) in the slot to put the Knights up 1-0.

After killing off the remainder of a penalty that was called late in the first to open the second, Salisbury went up 2-0 with 10:03 to go in the frame when Lucas Mercuri slid a puck over to Dean Bauchiero who then fired a pass towards the right post looking for a tip-in from a teammate but it deflected off a defender and in for the two-goal lead. 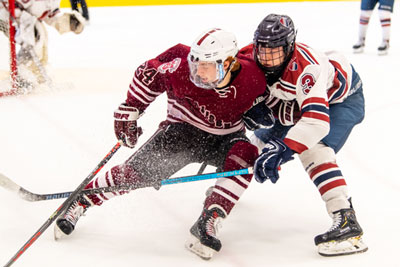 Salisbury’s Cole Vallese tries to keep Dexter Southfield’s John Fusco away from the puck in game won by the Crimson Knights, 4-0. (Photo by Dave Arnold)

A roughing and holding call the net few minutes for Salisbury provided some tests for senior netminder Nick Haas (25 saves), who stood tall. With just 1:55 to go in the period Mercuri tapped in a pass on the back door from Cole Eichler to make it 3-0 after two.

In an extremely physical and chippy third period both teams took several penalties, but cooler heads ultimately prevailed and an empty net goal from Matt DeBoer with just 16.2 seconds left officially kicked off the celebration that’s been five years in the making for Salisbury.

The Knights did their best to stay in a normal routine on Sunday morning and afternoon, and it worked.

“We got up this morning and coaches got our legs going taking a little walk around campus,” explained Haas. “Coaches didn’t want us sitting around, then we had a team lunch, came down here and the boys were all locked in. Our whole thing was just keep going and don’t give up no matter what the score was, luckily we didn’t have to pick ourselves up from any downs too much in this one and it was just a great game.

“I think this is big for the program, it’ll help with the team next year giving them a lot of confidence and it’ll help with recruiting too. Now we’ve got the target on our backs.”