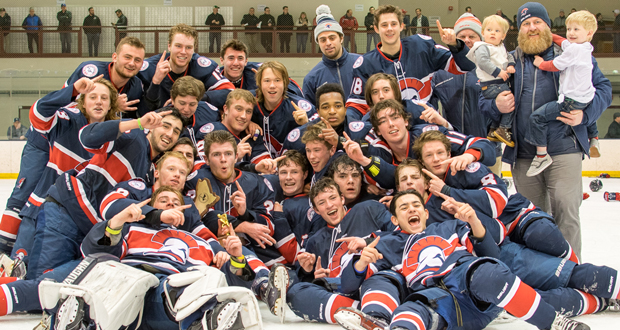 It was a game of up-and-down action. The Spartans led at each juncture (1-0, 2-1, 3-2, 4-3), only to see the Huskies come right back and tie the game, sending it to extra time. New Hampton had the better of the chances in the extra session, but couldn’t bury the game-winner

“Obviously, the next goal wins it,” said Lawrence Academy coach Robbie Barker. “I guess the way the game was going, we were due.” 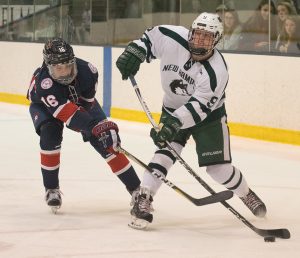 Lawrence Academy goaltender Ian Schaiff had to make a handful of keys saves in the early going of overtime, until the Spartans were given a power play. Late in the man-advantage, they broke in to the zone 3-on-2, with Fontaine coming down the left side. With Tyler Young going hard to the net, Fontaine whistled a wrist shot past New Hampton goalie Matt Sayles to win it for LA. (See video below)

“It (power play) gave us a chance to settle down, and move the puck the way we know how,” said Barker. “It was the intensity, the relentless consistent effort of our forwards  on the forecheck that led to that. And everyone did their job.”

Lawrence (21-10-1) took its first lead at 6:04 of the first period. Murphy Gielow cut down the slot, took a nice feed from behind the net from Jake Miller and rifled a shot just under the cross bar.

The Huskies answered at 8:49. Steve Ardagna collected the puck on the blue line. His shot was re-directed home by Michael Kane. Unfortunately for the Huskies, it took Lawrence just 11 seconds to regain the lead. Off the ensuing faceoff, Connor Sweeney carried the puck down the left side and put a nifty cross-ice on the stick of Young, who went top shelf from just outside the left post to make it 2-1. That is how the first period ended. 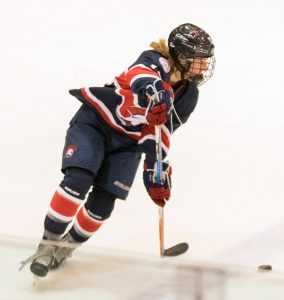 Lawrence Academy’s Gunnar Fontaine had two goals,
including the game-winner

New Hampton controlled the majority of the second period, outshooting the Spartans by a 12-3 margin. Lynden Breen tied it at 2-2 just over a minute into the period. After some nice work along the boards by Joe Dunlap, Breen wheeled away from the boards and beat Shaiff with a near side wrister.

The Spartan took their third lead on the power play at 5:39 on Fontaine’s first of the day. The sophomore winger snapped home the rebound of an initial shot by Neil Shea. Later in the period, the Huskies drew even again on Breen’s second goal. He hopped on a shot that struck a Lawrence defenseman in front and snapped it past Shaiff.

A great individual effort by Sweeney put Lawrence Academy ahead again at 4-3 early in the third. The sophomore took a feed from Sam Colangelo, turned on the jets to split the defense and fired a shot through Sayles’ pads.

Midway through the period, New Hampton tied it at 4-4 as Zac Lanoue stole the puck at the blue line, went in along and went high over Shaiff’s glove. The goal set the stage for overtime.

“We battled hard down the stretch, and were in contention for awhile (for an Elite Tournament berth),” Barker said. “But in the end, there really are only three teams that win their final game, and we are lucky enough to be one of them.” 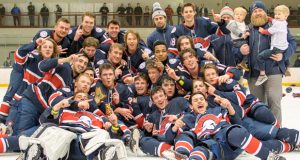 Lawrence Academy’s Gunnar Fontaine had two goals, including the game-winner 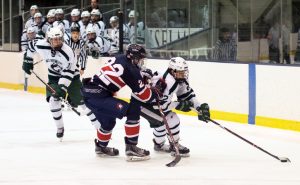 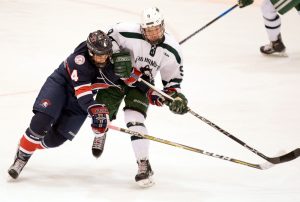 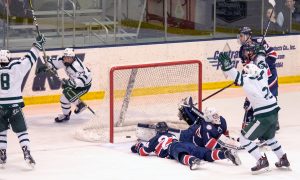