Kimball Union heads into the 2019-2020 Boys Prep School hockey season as a three-time defending NEPSAC Elite Tournament champion. The Wildcats’ last two titles have come after wins over Salisbury in the final game.

Could a third straight meeting in the New England title game be in the cards? Maybe.  Many prep coaches, when asked for their preseason top 5, listed the two powerhouses in the top two spots. 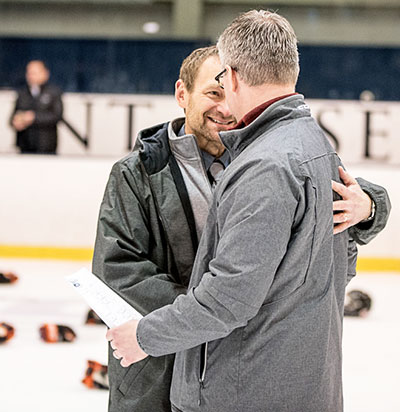 COACHES Tim Whitehead (l) of Kimball Union and Andrew Will (r) of Salisbury following the 2019 NEPSAC Elite Tournament title game. Will their teams meet again for all the marbles again in 2020?

A possible preview of that will take place on Friday, December 20th when the Wildcats and Crimson Knights face off at the Flood Marr Tournament at Milton Academy. Game time is 11am.

Kimball Union (30-5-2) gets the nod as the pre-season #1 team in the HNIB News Boys Prep Preseason Top 15. The Wildcats did lost 10 seniors from last year’s title club, but have have some key forwards back in Providence commit Tomas Mazura, Sullivan Mack, Zach Whitehead and Paul Dore, as well as captain Teddy Griffin on the blue line and goalie Veeti Kohvakka. KUA also brought in some blue-chip newcomers, highlighted by sophomore forward Adam Fantilli from Ontario.

#2 Salisbury (27-5-1) also graduated a lot of seniors, but like KUA, has a talented incoming group which will blend with some talented holdovers. The Knights have six D1 commits on the roster.

#3 Gunnery (22-6-3) should have a potent offense, led by no less than four Division 1 commits up front. The Highlanders will have their usual depth.

Many coaches are high on #4 St. Sebastian’s (23-6-0). The Arrows were an Elite 8 participant a year ago and boast some high-end talent, including three D1 commits up front. 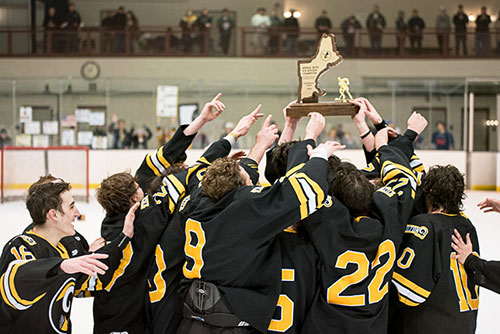 Rounding out the pre-season top five will be Dexter Southfield (22-4-2). Coach Dan Donato’s club has been an Elite semifinalist the past two seasons and made the top 8 four of the last five years.

Defending Keller Division champion Lawrence Academy (20-3-6) starts the year at #6. The Spartans will need to replace the loss of some high-end scoring but they are confident in the group they have.

Primed to make a big move this year is #7 Avon Old Farms (14-10-2). The Winged Beavers, a year older and stronger, do have five D1 commits on this year’s roster.

#8 Tilton (22-8-0), the 2019 Small School champions,  will have as deep an offense as anyone, with a host of new, experienced forwards joining a group that features its top three scorers returning.