With a host of Division I commits on the roster, defending Large School champion Loomis Chaffee (9-0-0) figured to be good this year. And so far, they have pretty much been perfect.

A sweep of four solid opponents at the Avon Old Farms Christmas Classic keeps the Pelicans unscathed so far this winter, winners of their first nine games and taking over the #1 spot in the first in-season HNIB News Boys Prep Poll.

Going back to last season, Loomis has now won 14 games in a row.

“It’s been a team effort in all games,” said Loomis coach J.R. Zavisza. “We’ve pretty much been rolling four lines. Almost all of our kids have at least a point on the season. We’ve also gotten solid production from our to six (all averaging over a point a game), had solid goaltending, and have played good team defense. Most importantly, we have had great leadership from our seniors, especially our three-year guys.”

Senior Alex Esposito, one of those three-year guys, leads the team with 13 points, including two goals in the 4-0 title-game win over Tabor.

Also perfect to date has been Phillips Exeter (10-0-0), which vaults up to the #2 spot. The Big Red already own wins over Gunnery, Kent and Cushing and have also been getting some balanced scoring.

Coach Dana Barbin’s club returns to action on January 7 against another unbeaten in Brooks.

Other than that lost to Exeter, #3 Cushing (8-2-1) has only lost to Culver in the finals of the Lawrence/Groton Tournament. The Penguins big line of Jake Simons, Bailey Conger and David Cotton has not disappointed. The trio is averaging almost six points a game.

Up next, the Penguins host the Watkins Tournament January 1-3, where they could see Culver again. 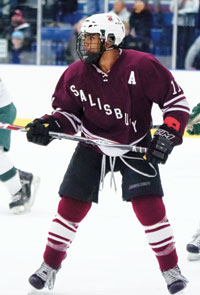 Pre-season #1 Salisbury (8-2-0) stands this week at #4 after rebounding from back-to-back losses with a Flood Marr Tournament title, where they knocked off Westminster, Nobles, Kimball Union and Deerfield. The Knights play Deerfield again when they return from break on January 10th.

#5 Choate (6-1-1) used its stingy defense and sound goaltending to win the Lawrenceville Tournament, taking a 1-0 double OT win in the title game over Belmont Hill.  The Wild Boars face Kingswood on January 7th upon return from the holidays.

Westminster (6-2-0) checks in at #6. The Martlets have lost only to Salisbury and Choate on the young season. Brunswick on January 9th will be a tough test.

#7 Kimball Union (9-2-0) jumps up a few spots from the pre-season poll. The Wildcats dropped a heartbreaker to Salisbury at Flood Marr, and also came up short there against Milton. KUA heads to the Joshua Weeks tournament just after New Year’s.

#8 Thayer (6-1-1) has not lost to a prep school team; its only defeat was to Canada’s St. Andrews at the St. Sebastian’s Tournament. 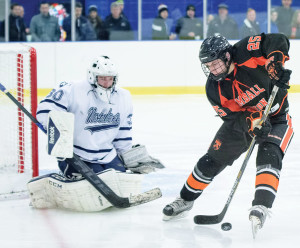 Nobles (4-3-1) drops to #9 after losses to Salisbury and KUA (and a tie with Hotchkiss) at Flood Marr. The Bulldogs also lost to Tabor this month, but did post a solid win over #10 Dexter (5-3-1). One of Dexter’s losses came to Culver at Lawrence/Groton and they have also tied Cushing. Dexter heads to the Watkins Tournament at New Year’s.

#11 Gunnery will certainly be looking to move back up the polls as it returns from break. After losing to Kent and Loomis Chaffee at Avon, the Highlanders did beat St. Paul’s and Berkshire there. They get Kent again on January 7th, 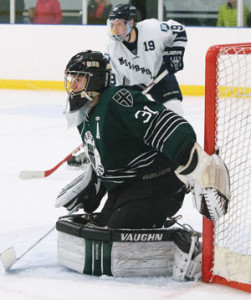 BROOKS GOALIE Max Prawdzik has been superb so far in leading Brooks to an 8-0-1 start.

Still unbeaten Brooks is off to a great start, coming off a title win at its Brooks/Pingree Tournament.

“Being better defensively as a team has been a big point of emphasis,” said Brooks coach Dave Ries. “It’s come a long way but we definitely make our share of mistakes. When we do, though, our goalies have been coming up big. Max Prawdzik has kept us in and won several games, and Johnny Trotto came up big against NYA.”

* Registration for all Hockey Night In Boston 2015 Summer Festivals and Tournaments is now open. Please click here for more information