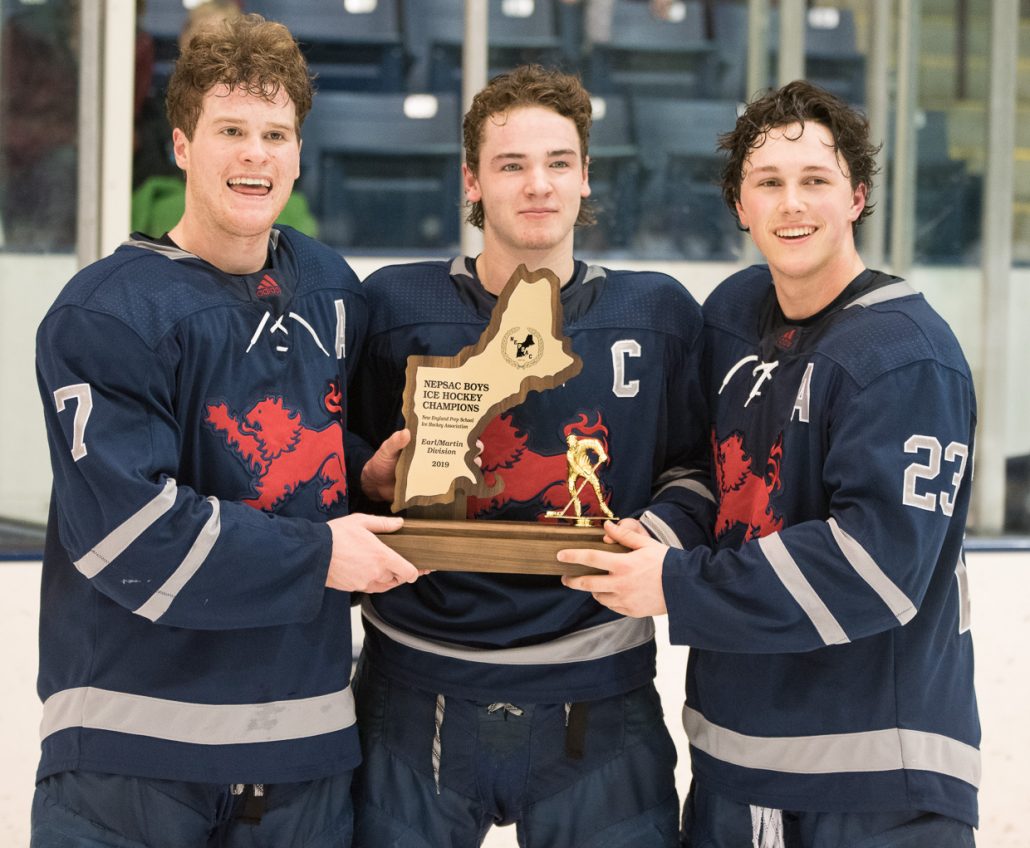 It is amazing what buying into a concept of team defense can do. Just ask the Kent School.

It took awhile for that concept to fully sink in for the Lions, but once it did they took off. And now, they can call themselves the 2019 Martin/Earl Large School champions of prep school hockey.

That solid team defense, which held Cushing to just 15 shots on net, nine of those coming in third period, and third period goals from Aidan Cobb and Alex Giummo, powered the Lions to a 2-1 win over the Penguins and secure the first New England prep school hockey title in school history. 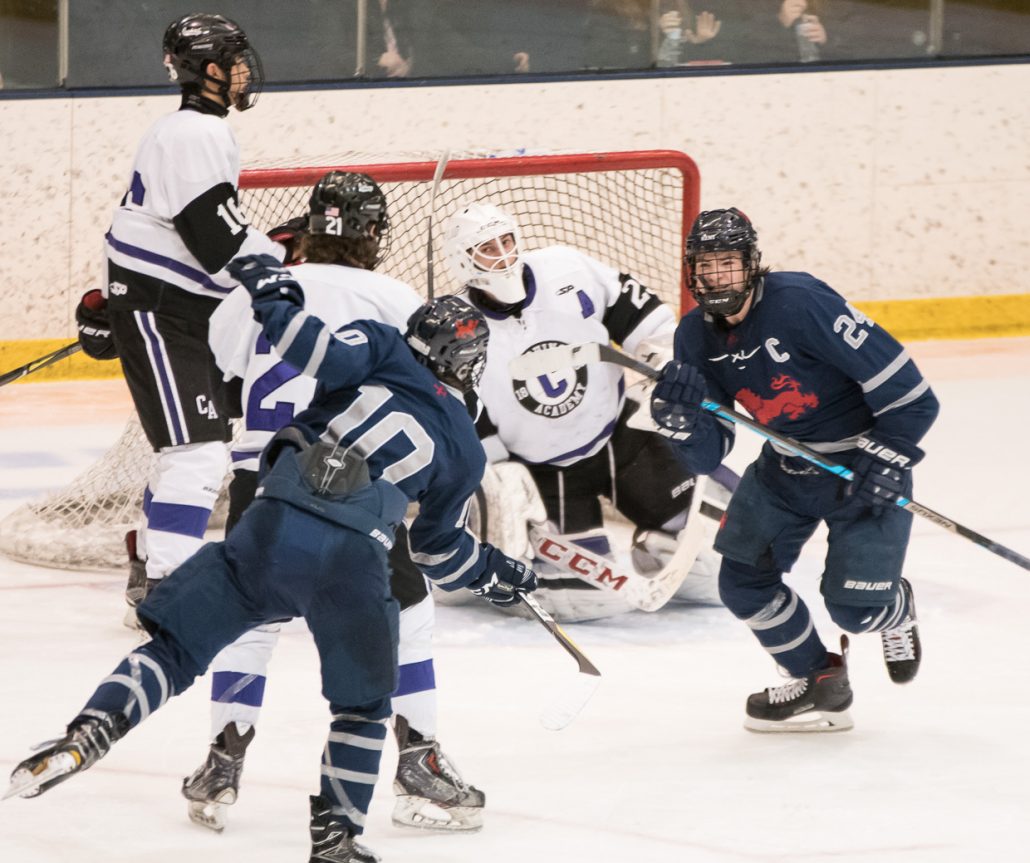 “We talked about it as a coaching staff, that the Kent program has been close,” said Kent coach Dale Reinhardt. “Prior to me being here, I know they went to the Elite finals twice. Earlier this year, defense was our bugaboo. All year long we have scored a ton of goals. The guys really started to buy in as the season went along and we got better and better defensively.”

This championship game win capped a 9-0-1 streak to end the season for the Lions, who finished with an overall mark of 17-7-3.

“Look at the numbers before the streak and now after the streak,” Reinhardt said. “The difference was the defensive side of things. ”

The teams really spent the first period feeling each other out. It was scoreless. Cushing had just two shots on Kent goalie Alex Contey, and Kent just three on Cushing senior Joe Sharib.

The Lions got their offense going in the second period, firing 15 shots on Sharib, but the Union College bound netminder was equal to the task, keeping this a scoreless tie entering the final stanza. Both teams went 0-for-3 on the power play over the first 36 minutess

Kent went on the power play with 11:23 left to play, and less than a minute later, drew first blood.

Junior Dane Dowiak slid a pass at the blue line to Jason Kleinhans, who fired a low shot that Aidan Cobb was able to re-direct past Sharib to give Kent a 1-0 lead. And, just 13 seconds later, an Ian Pierce shot was saved by Sharib, but the puck dribbled out of his grasp and Alex Giummo was able to tap it home for a 2-0 Lions lead. 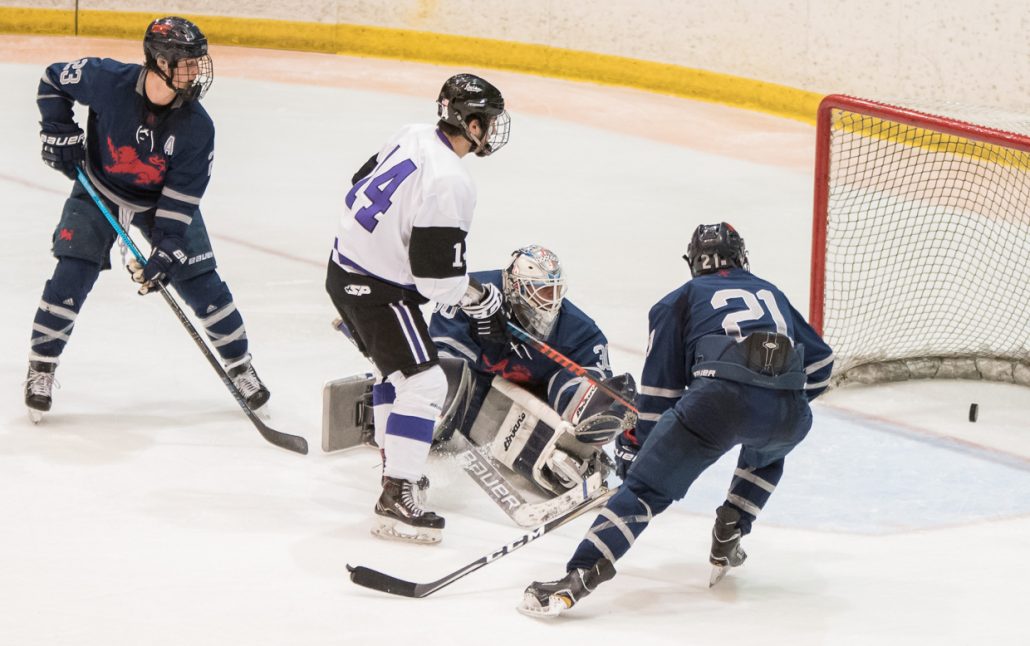 Cushing’s Nick Cafarelli is able to sneak a rebound past Kent goalie Alex Contey for the Penguins only goal of the game.

The Penguins, who knocked off Phillips Exeter 2-0 and Nobles 4-2 to reach the final, got its offense going in the third period, and at 11:04, with the teams skating four aside, Nick Cafarelli slid home the rebound of a Brad Zona shot. All of a sudden it was a 2-1 game.

“We’ve certainly been there before,” said Reinhardt, who team had squandered a handful of leads in previous games this winter. “These guys never make it easy for us. But I have to give our guys a lot of credit, especially the senior group. They were not going to let us lose this game, I could see it in their faces.”

Kent spend the last 3:33 of the contest shorthanded thanks to a pair of minor penalties, but they were able to hold off the Penguins charge and grab the school’s elusive first New England title.

“We knew a couple of years ago when we had this core group as youngsters that we would have something special by the time they were seniors,” Reinhardt said. “Our captains are all three-year players. We added guys like Ian Pierce, who has been an absolute star for us, and Michael Posma. Justin Stich has been here for four years and it is rare to have a four-year player in prep school. They proved it today.”

In the 2019 Boys Prep Large School Championship, Kent School wins the title with a 2-1 victory over Cushing Academy. 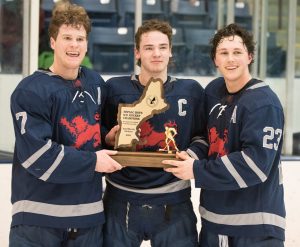 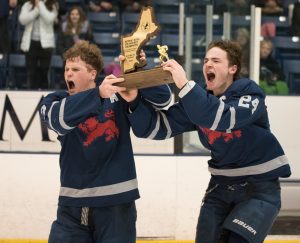 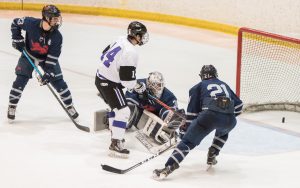 Cushing’s Nick Cafarelli is able to sneak a rebound past Kent goalie Alex Contey for the Penguins only goal of the game. 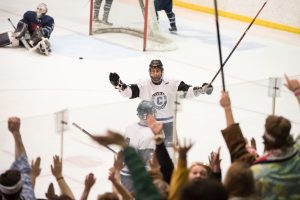 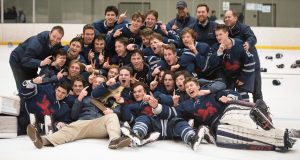 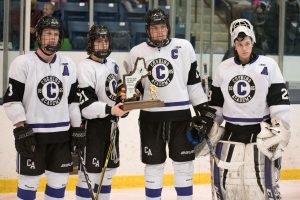 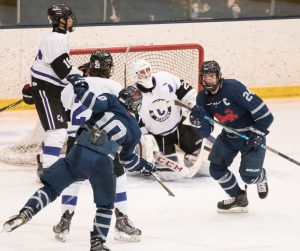 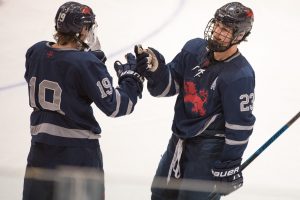 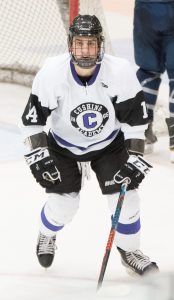 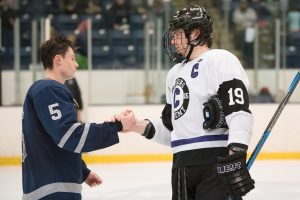