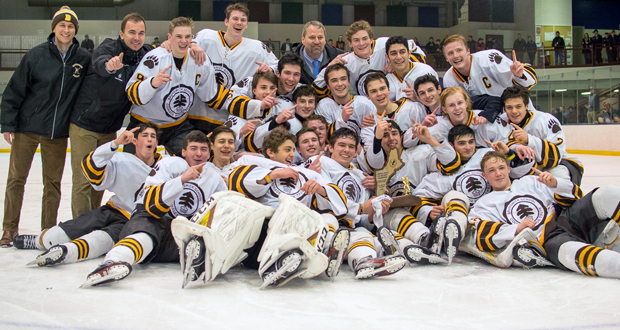 But the resilient Tigers did not quit. They came out in the third period, and scored two late goals, the latter on a power play, to send the game into overtime. Thayer clearly had the momentum and it showed in the extra session, dominating play.

But, on one of the few instances the puck left Brunswick’s defensive zone, senior defenseman Ryan Carmichael made a great end-to-end rush. His shot was saved by Thayer goalie Gavin Fitzpatrick, but senior Jack Forrest was in the right place at the right time, banging home the rebound to give Brunswick a 4-3 win and the Large School championship. 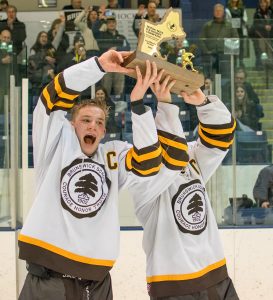 It was also a sweet ending for Forrest, who was whistled for that late third period offensive zone penalty that put the Tigers on the power play, where it took them just 10 seconds to tie the game.

“It’s almost like the hockey gods were looking out for him.” said Brunswick coach Ron VanBelle. “The poor kid. I think he was blaming himself for taking that penalty. My assistant coach Mike Kennedy said on the bench that Forrest was going to get it, he would make up for it and get the winning goal. Good for him.”

The goal capped an impressive playoff run for Brunswick, one that also included shutout wins over #4 Williston (2-0) and top-seed Northfield Mt. Hermon (5-0).

“We have made the playoffs four years in a row and every year we got a little better,” VanBelle said. “We had never been able to hang the banner. I’m proud of what we have accomplished here.” 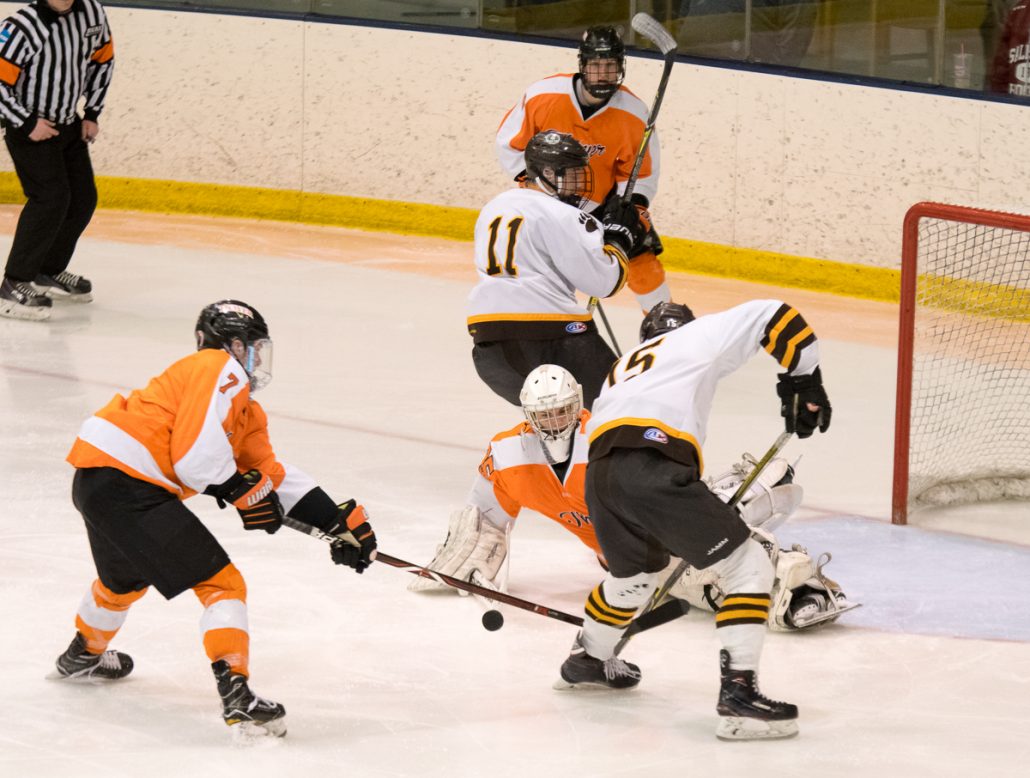 Down 3-1 with the majority of the third period already gone, Thayer took over. At 12:12, the Tigers made it a 3-2 game when Jayson Dobay’s shot from the left point struck Jay O’Brien in front and bounced past Brunswick goalie Dan Dachille. With 2:59 left, Forrest was whistled for a trip. Right off the ensuing faceoff, O’Brien fired on net. His shot was blocked in front but right on the stick of Aidan McDonough, who blistered home a wrist show to draw Thayer even.

Brunswick was then forced to kill another penalty before regulation time ended, and hung on for the first six minutes of overtime, where Thayer had the first seven shots on net, until Carmichael was able to break it out.

“I think we were the better team for the first half of the game, and Thayer was better the second half,” VanBelle said. “In the third period, we played defense. That is not any way to play hockey. You can tell them all you want not to hang back, to play our game, but Thayer was pushing and our guys may have thought 3-1 was going to be enough. It wasn’t.

“Thayer was dominating in the overtime. It was like they were on the power play the whole time. But it only goes to show you about shots on net. It only takes one.”

The Bruins grabbed a 1-0 lead on a great individual effort by co-captain Christian LeSueur, making a great rush to the net and beating Fitzpatrick while prone on the ice. After O’Brien tied it at 12:44, Brunswick went ahead 2-1 at 14:32 on a goal by Tom Richter, who converted a neat feed from Nick Boardman.

Boardman had the only goal of the second period. It came at the 6:47 mark on the rebound of LeSueur’s initial bid.