As usual, the Hillies have a solid group of returners. One place they don’t though, is in the nets, where they will have to come up with a replacement for workhorse Connor Hopkins, as the Yale commit has moved on.

Former Govs standout Brian McGuirk, takes over behind the bench and will focus right away on getting the program moving in the right direction. 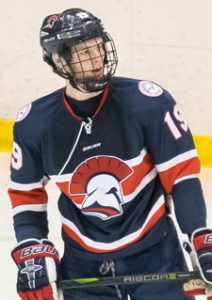 A couple of key holdovers from last season are senior Xander Barnes, and juniors Mitch McGinn and Shane O’Leary. Two newcomers who will have an impact right away are Owen Fowler, a recent commit to UMass Lowell, and Sean Brown.

The 2018 Small School New England champions have their eyes on a bigger prize this year, with the return of a talented nucleus, and the arrival of a solid core of new players. The Spartans should be amongst the favorites in the Keller Division. 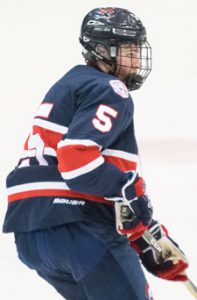 Coach Robbie Barker has the pleasure of welcoming back a trio of forwards who have all committed to D1 schools. Junior Sam Colangelo (Northeastern) racked up 42 pts last season and is joined by junior Tyler Young (37 pts – Providence) and senior Connor Sweeney (25 pts – UNH). Senior Ethan Bastien (20 pts) is another key returner up front. And joining that group are talented sophomores David Sacco (UNH commit) and Riley Duran (Providence commit). 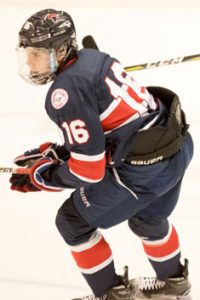 In the nets, returning senior Ian Graiff was the #1 guy between the pipes last winter. He is joined in the rotation by new junior Brandon Milberg.

It could be a bit of a rebuilding year for the Mustangs, who lost 10 players from last year’s Keller Division champions and Elite 8 tournament participant.

Coach Paul Cannata will lean heavily on the return of three veterans seniors to provide leadership in all ends of the ice in forward Quinton Fox (40 pts), defenseman Emmet Powell (18 pts) and goaltender Erik Voloshin, who played every game last winter for the Mustangs.

A seasoned group of juniors and some talented seniors will dictate the success of the Bulldogs this winter. “Being a more mature team this year than we have been in the past two years should bode well for us,” said Nobles coach Brian Day.

Seniors up front ready to lead are Ryan Stevens (a Yale commit) and Will Zink (18 pts). Junior Casey Severo (29 pts), committed to Merrimack, led the Bulldogs in scoring last year. Junior Jack Cronin (20 pts) will be involved heavily, as will juniors Owen O’Connor and Robert Lapsley and sophomore David Jacobs.

Veteran senior John Murray will backbone the Nobles defense along with juniors Pierce Kenney and Colby Bailey. In goal, junior Marc Smith got some valuable minutes last season as he looks to take over the top spot between the pipes.

Expect Nobles to also have some talented newcomers crack the lineup this winter.

Despite the early loss of three players, including goalie Drew Commesso to the USNTDP, the Arrows have a very talented core group returning that should lead the club to a good amount of success. “We will need the returning players to provide offense and leadership until the younger players can get up to speed,” said St. Sebastian’s coach Sean McCann.

The Arrows boast four forwards who have already committed to D1 schools that should put up some huge numbers. Seniors Tommy Lyons (35 pts – Harvard) and Liam Gorman (33 pts – Boston University) are the team’s top two returning scorers, with juniors Liam Devlin (27 pts – UNH) and Liam Connors (25 pts – Boston University) not far behind. Senior Connor Joyce is another integral part of the offense.

The Seawolves expect to be solid on the blue line, and boast a balanced scoring attack and veteran goaltending. Disciplined team play will be vital, according to coach Gerry Dineen. 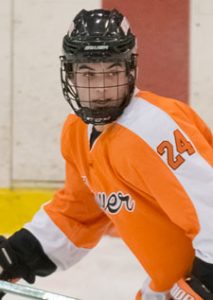 The defensive unit will have a solid nucleus made up of four seniors in Tyler Harvey, Connor Guyette, Ian Gindhart and Chris Picard.

Senior Kyle Myer and junior Brandon Sherman are a pair of experienced netminders. Both saw considerable time in the Tabor cage last season. 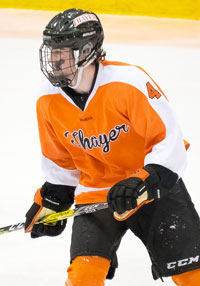 Graduation hit the Tigers hard, as a handful of premier players moved on from a club that was an overtime goal away from a New England Large School title last year. In all, Thayer lost its top five scorers. Nevertheless, there is still plenty of talent available, so don’t count out the Tigers again this winter.

Senior Reilly Moran (Army commit) and senior Christian Hayes will be a dynamic duo up front for head coach Tony Amonte. Sophomore Sasha Teleguine, already committed to Northeastern, will have a huge offensive role as well.  Senior Nolan Fitzpatrick is back as well.

On the blue line, senior Jacob Flynn is a solid two-way rearguard and will be a backbone for the Tigers. Sophomore Nolan Hayes expects to have a key role as well.

Junior Gavin Fitzpatrick emerged last year as a solid presence in goal for Thayer and is ready for even bigger things in 2018-19. 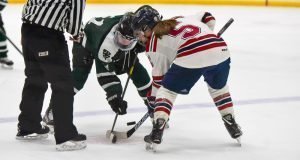