It should be another electric season in the Housatonic and Founders leagues, which again boasts talented teams from top to bottom. Last year, Kent won the NEPSAC Large School championship, and Salisbury reached the Elite Tournament final. The league features a plethora of D1 commits. 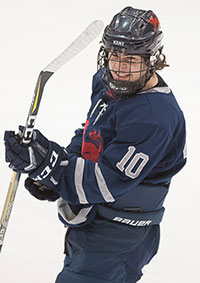 The defending Large School Champions suffered some key losses, including underclassmen Alex Laferriere, Blaine Moore and Dane Dowiak, but expect them to re-tool in a big way with lots of new, talented faces. 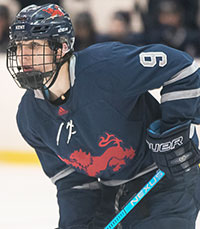 Senior Matthew Perryman and juniors Mike Kwiecinski and Nick Marciano are back on the blue line for the Lions. Joining the defensive crew will be post-grad Simon Mandel and new junior Finn Martin.

Goaltending may decide the team’s fate, according to Reinhardt. New junior Jeremy Siegel hopes to have a key role.

The Pelicans suffered through a sub-.500 campaign a year ago, but there appears to be an abundance of talent this year to get the club back on the north side of the .500 mark.

Senior Kennedy O’Connor (10 pts), a UMass-Amherst commit, will be a leader on the blue line for coach J.R. Zavisza, as will senior Ben Ritter, a Dartmouth commit. Senior Ryan Armstrong is back, while joining the group are junior Jan Olenginski and sophomore Charlie Andriole. 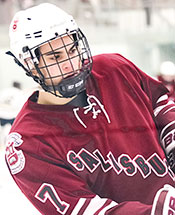 In goal, junior Kyle Chauvette, committed to Holy Cross, is back and joined in the rotation by new sophomore Ethan Roberts.

Normally, losing 14 players would be a big hit. Not for the Crimson Knights, who have an impressive group of newcomers in to supplement a solid group of returners. Salisbury will be in the Elite 8 discussion again this winter, hoping for a return to the title game, where they have fell the past two seasons. 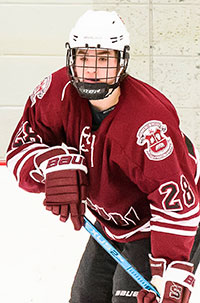 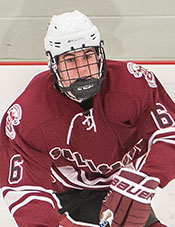 Senior returner Nick Haas and new junior Max Donoso give the Crimson Knights a mature and skilled duo between the pipes.

A year older and stronger, the Winged Beavers are primed to make some big improvements this winter. More than one opposing coach said to keep an eye on them. 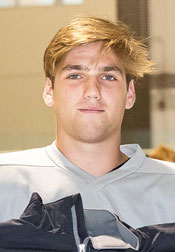 Experience could take the Martlets a long way this winter. They return a veteran senior nucleus that will mesh with a host of talented newcomers.

A starting goaltender will emerge from pre-season workouts. 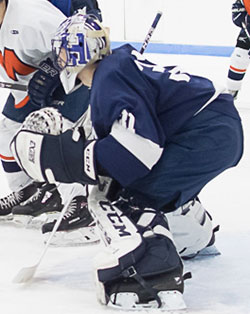 The Bearcats were a tough out last winter and there is no reason to believe they won’t be again this year.

A good group of senior forwards will provide the necessary and leadership for coach Mike Traggio. Heading that group will be Gavin Puskar (19 pts), Jeremy Abraham and Matt Tullo. A pair of newcomers ready to go up front are junior Jonathan Horn and sophomore Karsen Dorwart.

Defense will be a strongpoint for Hotchkiss, led by senior book-ends Nick Traggio (15 pts – Brown commit) and Jack Ferguson.

The Bearcats will have one of prep school hockey’s premier netminders in senior Henry Wilder (2.15 GAA), who has committed to Boston College.

More offensive production will be a big key for the Wild Boars this winter. Veteran head coach Pat Dennehy feels his defense and goaltending have the potential to be better this year.

In the nets, senior returner James Dunne will team with post-grad Tomas Horak, who hails from the Czech Republic.

A balanced offensive attack and strong senior leadership will be two keys to success for the Big Green this winter.

Senior Alex Robert (20 pts) will be a forward catalyst for coach Tim McVaugh, Colorado native Ben Zimmerman, a new junior, should be a factor.

The defense will be deep. Senior Eamon Doheny (18 pts) and junior Pierce Patterson (11 pts) will be vital on the blue line. Post-grad Jake Higgins, a Holy Cross commit, will step right in. Also looking for key minutes are sophomore Isaac Abbott and freshman Brian Grant.

In the nets, Deerfield must find a replacement for Thomas Gale, a Dartmouth commit currently playing in the NCDC. In the mix will be new freshman Justin Katz, a Montreal native, and senior returner Justin Prete.

After a promising start to last season, the Rhinos cooled off a bit in the second half. They hope to start this season well, and continue throughout the year.

Coach Ryan Shannon has only two returning defensemen, so expect the duo of senior Patrick McLean and junior Max Willard to see a lot of time. With the open spots, newcomers Jackson Cook (post-grad), Zach Hahn (junior) and Connor Colucci (sophomore) have the opportunity to have big roles.

In goal, sophomore Mikey Roberts looks to build off a solid freshman campaign.

Young skill and speed, meshed with senior leadership and resilience, will be the key for the Pride this winter.

Senior Christian Colantonio will be a rock on defense for the Pride. New senior Frank Djurasevic should step right in.

Junior David O’Keefe is a returning netminder for Trinity Pawling.