Heading into the Flood Marr Tournament, two-time defending New England Prep Elite champion Salisbury was in an unfamiliar spot, having lost two straight games. Not a good place to be in with the types of opponents the Knights would be facing in this prestigious tournaments. 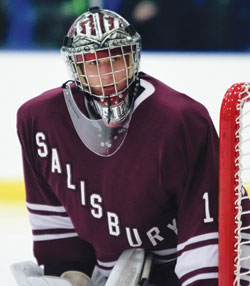 But, when it was all said and done, Salisbury was able to do the job.

“I am very proud of our guys,” said Salisbury coach Andrew Will. “We headed into the tournament with back-to-back losses. We lost a lead late in the first game against KUA, but managed to find a way to pull out the win with 12 seconds remaining. That really set the tone for the weekend and we played with a lot of confidence from that point on. We are a team that needs contributions from everyone and we got that.”

In the title game against Westminster, Cole Poliziani notched the game-winner, breaking a 1-1 tie in the third period. Vimal Sukumuran had the Knights’ first goal and Anthony Vincent added an empty-netter.

“We knew it was going to come down to which team could come up with a big play,” Will said. “Cole scored the go-ahead goal on a great second effort. Both teams were battling and both teams were tired. Fortunately, we were the ones that came out on top.”

Sukumuran had two goals in the win over Deerfield, where Poliziani and Kale Kane also scored. Kane was the hero in the win over Kimball Union with the clinching goal with 12 seconds left. Sukumuran, Jordan Kaplan and Vincent had the goals in the 3-0 whitewashing of Nobles.

MacBurnie was in goal for all four games.

“Bailey was terrific all weekend,” Will said. “He played with excellent poise and composure and came up with some big saves when we needed them. Bailey plays with a lot of confidence which our players pick-up on.”

Another team with an impressive holiday tournament showing was Loomis Chaffee (9-0-0), which won the Avon Old Farms Christmas Classic with a 4-0 whitewashing of Tabor in the title game. The Pelicans also defeated Gunnery, Kent and St. Paul’s en route to the title.

Against Tabor, Alex Esposito scored the first two goals for Loomis. Colin Merrill and Cam Toohey also had goals and Tim Birarelli pitched the shut out in goal.

The win put an exclamation point on a tough weekend of hockey at the Avon Classic.

“I’m exhausted at the end of it and my feet only hit the ice for the handshake at the end of the game,” said Loomis Chaffee coach J.R. Zavisza. “I can only imagine how the kids feel. While I am disappointed our game vs. Choate got canceled last week, it was somewhat of a blessing in disguise as it permitted us more energy going into the tournament.”

The tourney win should give the Pelicans a boost heading into Christmas break.

“The best thing the players can do is first rest, recover and enjoy time with friends and family,” Zavisza said. “But towards the end of break they’ll need to get back on the ice and get conditioned, as we’ll have to get right back to work on January 5.”

Also unbeaten heading into break is Brooks (8-0-1). The Bishops took their own Brooks/Pingree Holiday Tournament, knocking off Tilton, 4-2, in the title game. 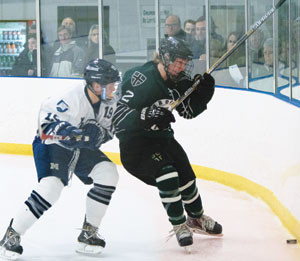 Chris White got the scoring goal in the game’s first minute, followed on the scoresheet by K.J. Moore, P.J. Kelleher and Max Rand.

“We came into this year with pretty high expectations for how we want to play as a group,” said Brooks coach Dave Ries. “We’re trying to be more aggressive all over the ice. The boys have picked up a lot of things quickly. We’re far from perfect but happy with how the team progressed over the last month.” 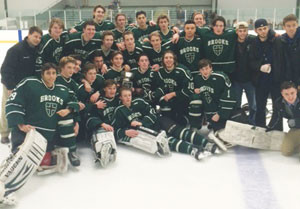 BROOKS celebrates its Holiday Tournament championship after 4-2 win over Tilton.

“I’m excited to see if we can keep our momentum after break,” Ries said. “It will be the biggest challenge we’ve faced this year. We’re off for two weeks right now and come back to face Exeter in our first game. I’m looking forward to seeing how the boys respond.”

Choate (6-1-1) took home the title at the Lawrenceville Tournament in New Jersey, winning three games via the shutout route, including a 1-0 double overtime win over Belmont Hill in the championship game. The Wild Boars also tied Nichols School 3-3.

Brendan Russ was the hero for Choate, scoring the title-clinching goal in double overtime, on a rush at the end of a penalty kill situation. Turner Uppgren and Jack Hoey drew assists on the goal.

Choate also blanked Canterbury (5-0) and Northfield (3-0). Russ, Charley Borek and Bobby Goggin each had two goals on the weekend.

“We had a bout with the flu earlier in the week which was a concern, but our guys pulled through,” said Choate coach Pat Dennehy. “Our team defense was excellent, only allowing three goals against all weekend. Both Sam Tucker and Andrew Tucci were excellent in net.”

Tucker was named the Tournament MVP, while Tucci won the semifinal game against Nichols with stellar play in a shootout.