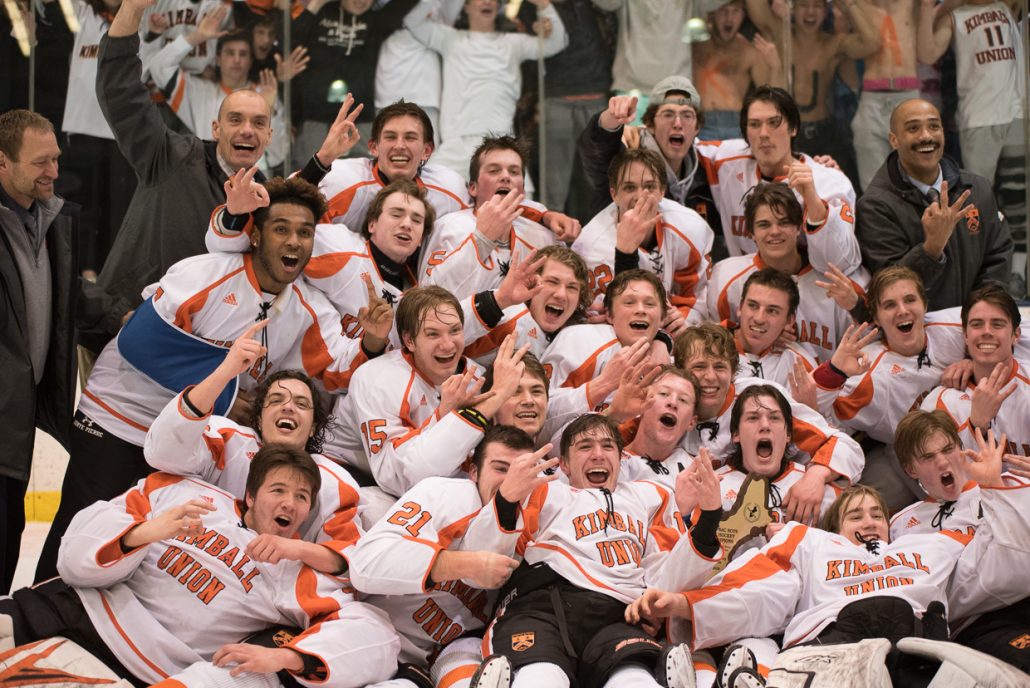 As Kimball Union coach Tim Whitehead soaked it all in after his Wildcats won their third consecutive Stuart/Corkery Elite 8 New England title, knocking off top-seeded Salisbury 4-3 in a rematch of last year’s championship game,  he looked back at the just completed campaign and had a laugh.

“We were worried after the first week of the season,” he remembered. “We went to a tournament up at Stanstead College and took a bunch of penalties. We really didn’t know if we could do it this year. Then we went to the Flood Marr Tournament. We were OK, but not great. We really didn’t play as a team. We played as individuals. That’s why the second half has been so much fun. Ever since the Nichols Tournament. We knew we had a chance to be here, but just hoped we could get the last bounce.”

In this title game, the Wildcats also got the last blast, as in a rocket of a slap shot by Paul Dore, who skated down the left wing and unleashed a shot that beat Salisbury goalie Jared Levine far side with 54.2 seconds left in regulation, snapping a 3-3 tie. 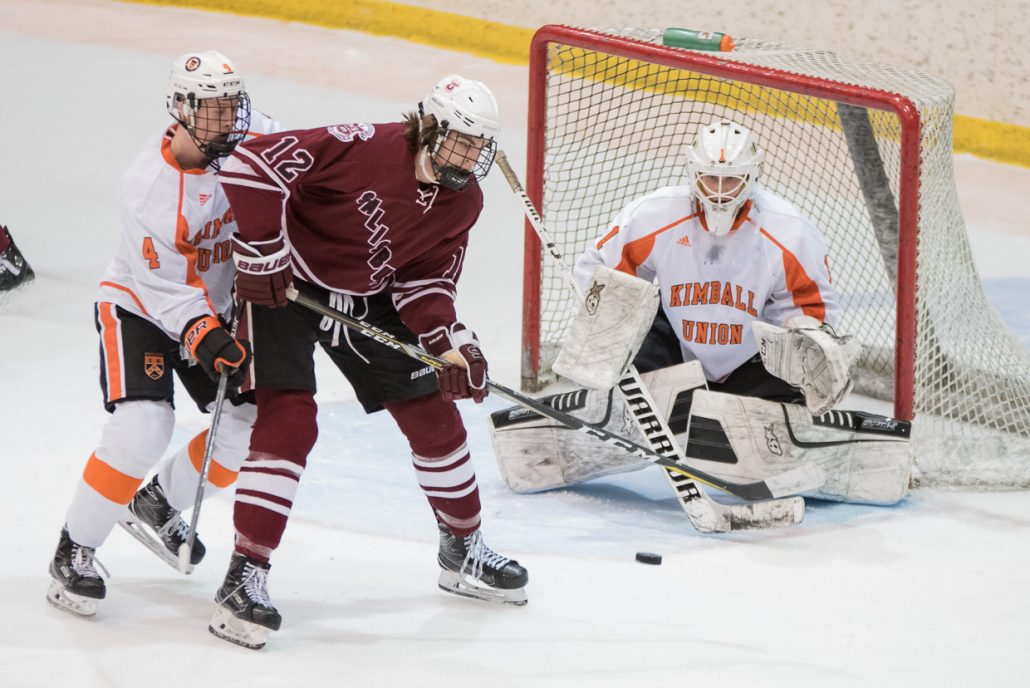 SALISBURY’s Dean Bauchiero looks to get a stick on shot as KUA goalie Veeti Kohvakka gets ready.

Dore’s goal put the exclamation point on a comeback that KUA rally from a 3-1 second period deficit, not that easy to do against a squad of Salisbury’s caliber.

The Crimson Knights led 1-0 after the first period, expanded the margin to 2-0 before the Wildcats got on the board, and then again went ahead by a two goals on Lucas Mercuri’s second tally of the day with six minutes to go in the second period. KUA could have panicked, but didn’t.

“We felt really good coming out for the second period,” Whitehead said. “We scored, but then they came right back and scored again. That was a tough moment. The question was ‘could we bounce back?’ We then got those two quick ones. I’d say that was the turning point of the game.”

Junior forward Thomas Mazura, a Providence commit, got the Wildcats back to within one at 14:07 during a power play. Stationed on the right wing circle, Mazura faked a back-door pass to a cutting Teddy Griffin and fired home a wrist shot. Griffin and Christian Felton drew assists on the goal.

Griffin was called for a slashing penalty with 1:02 left in the period, but it would be the Wildcats who cashed in while shorthanded. Sullivan Mack did a great job collecting the puck deep behind the Salisbury net and sent a pass to the slot to a streaking Zach Taylor who rifled home a one-timer to tie the game at 3-3 with 39 seconds left in the period. 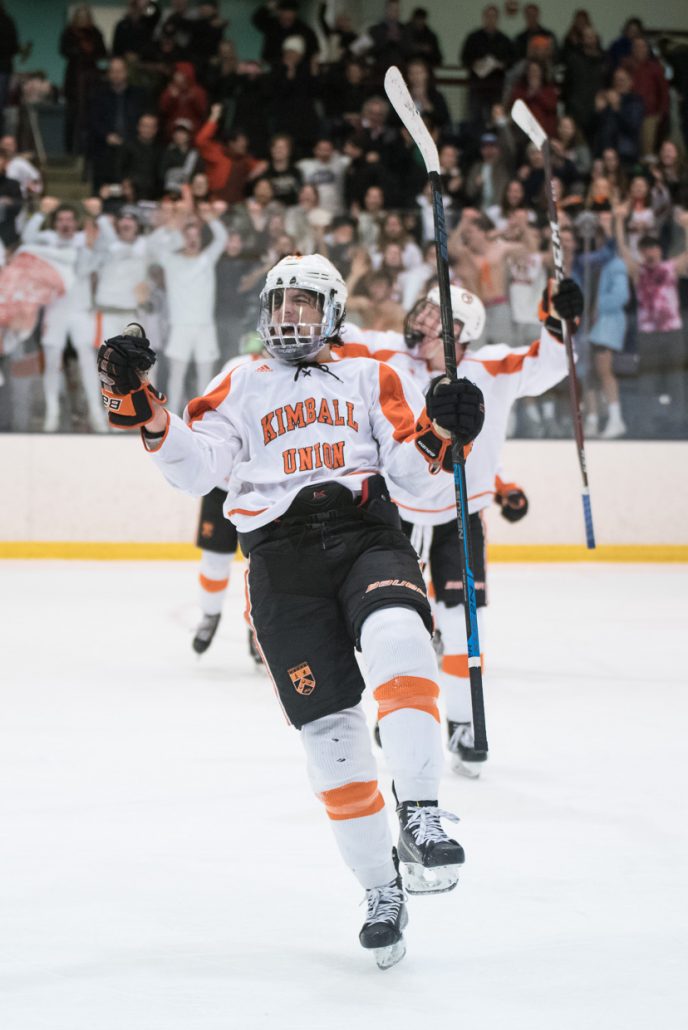 Both teams skated hard in the third period and had chances. Right when it appeared the contest would be destined for extra time, Dore found himself with some room on the left side. He moved over the blue line and sent a wicked slap shot past Levine, giving KUA its first lead of the night.

The first period saw minimal scoring chances. Salisbury got the frame’s only goal. It came off the stick of Michael Fairfax, who jammed home a nifty centering pass from Ilya Usau.

The Wildcats, who went 16-0-2 to end the season, cut that lead in half when Arlo Merritt corralled the puck in the KUA zone, made a nice rush up the left wing and snapped home a wrister just inside the near post.

Just over two minutes later, Mercuri scored again from in tight, converting a nice feed from Hryckowian, to give Salisbury a 3-1 advantage. 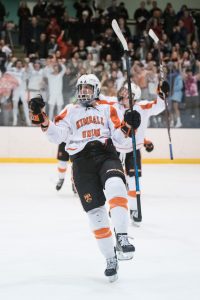 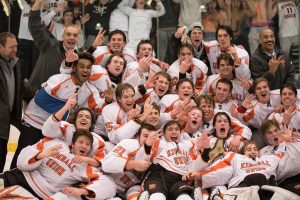 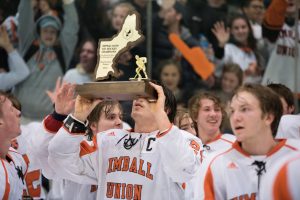 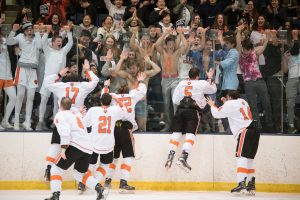 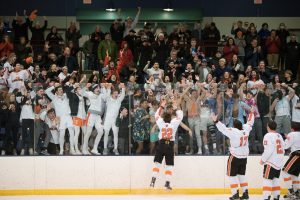 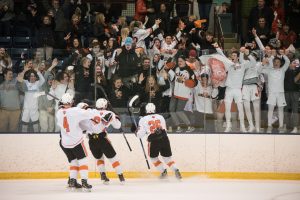 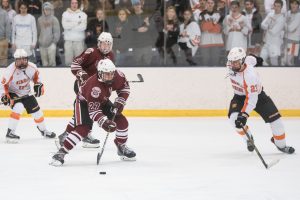 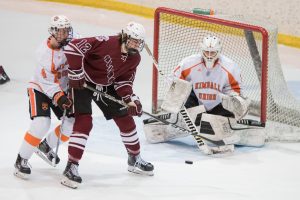 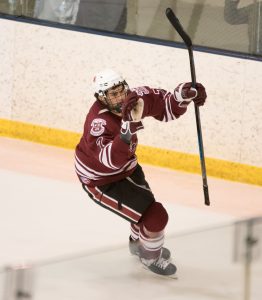 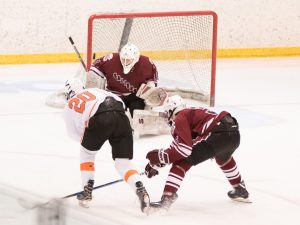 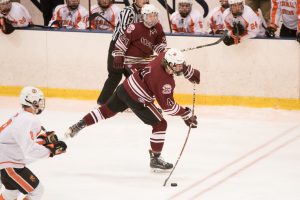 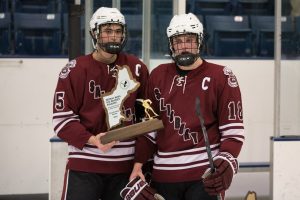 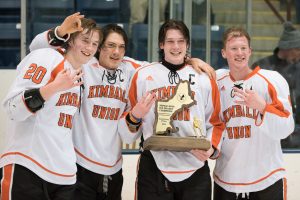