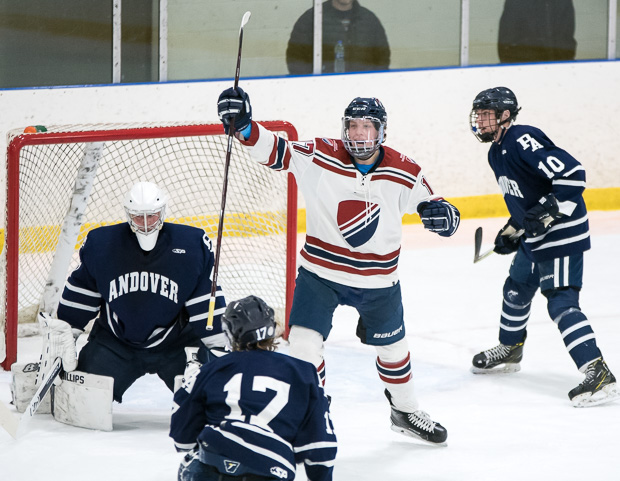 Whatever funk the Dexter Southfield hockey team was in during the recent Watkins Tournament could now be in the rear view mirror.

The team won just one of four outings at the tournament, albeit against solid competition. But now, after Wednesday’s 4-0 shutout over Phillips Andover, Dexter has won three straight in impressive fashion.

In this one, Dexter assumed control with three goals in just over four minutes late in the first period.

“I thought we played better than our record,” said Dexter Southfield coach Dan Donato about the Watkins Tournament. “I think we were a bit tired, playing four games in 48 hours. We played pretty good tonight. The difference for us tonight was I thought we got a little puck luck early, pucks going in off bodies, things like that.”

Dexter grabbed a 1-0 lead at 13:05 of the first period. Defenseman Ben Meehan scored it, moving in from the left point after taking a pass from John Fusco and finding the short side past Andover goalie Charlie Archer. 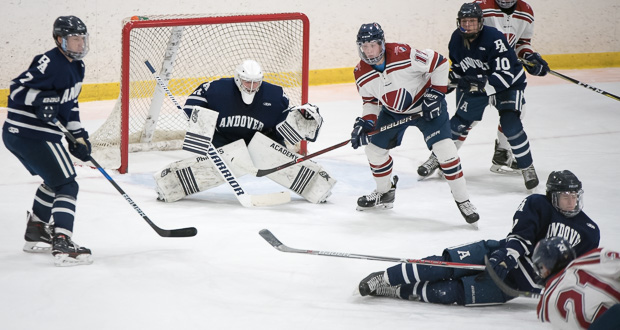 Later in the frame, the Big Blue took a couple of penalties and Dexter made them pay, scoring twice in 25 seconds, once on a 5-on-3, and once on a 5-on-4 to take a commanding 3-0 lead.

Defenseman Kevin MacKay had the second goal at 16:38, assisted by Doug Grimes. And then at 17:03, Northeastern commit Chase McInnis fired a low shot from the left side that got under a sliding Andover defenseman and past Archer, who may have been screened.

“We have been working on the power play a ton,” said Donato. “We were a little bit anemic on it for awhile. Obviously having a kid like (John) Farinacci back on Friday will help bolster that as well”

There were more than a few instances in the second period when Andover could have got right back in the game. The Big Blue unleashed four shots on goal in the first 30 seconds of the period alone, by the line of Mac Carso, Thomas Manty and Christian Powers. But each time, Dexter goalie Derek Mullahy was there to make the stop,”

“I think we found out tonight that we have one of the best goalies in New England in the second period,” Donato said. “I don’t think we managed the puck very well in the second period, at least as well as we should have. They got a breakaway or two and Derek was there each time to make the stop.”

Connor Blanchard made it 4-0 on Dexter’s first shot of the third period, taking a long stretch pass on the right wing side from Bobby Pearl, moving in and burying a wrister over Archer’s shoulder.

This was the second straight game the Big Blue, down a few key bodies due to injury, have been shut out. They fell to Exeter Saturday by a 6-0 score.