*  Salisbury and Avon Old Farms renewed their rivalry this past weekend, each picking up a win on home ice. The Winged Beavers doubled up Salisbury 6-3 with a pair of goals from defenseman Seth Robinson and Tim Heinke, and single goals out of Nick Capasso and Chase Ramsey. On Sunday up at Salisbury, the Crimson Knights took a 4-1 win led by a pair of goals from Sam Deckhut. Tommy Rooney and David Chen each added a goal for Salisbury.

* Kimball Union stayed unbeaten with an 8-3 win over Proctor in the Lakes Region. Jaiden Moriello and Will Blackburn both scored twice for the Wildcats. Conner Chalmers, Matthew Maltais, Alex Keller and Bryce Bollman each scored as well in the win.

* Fitz Frechette had both goals and Cal Welch made 32 saves in St. Paul’s 2-0 win over New Hampton.

* Kent got into action this past weekend and picked up a pair of victories, downing Canterbury 5-3 and then 3-2 in OT. Ryan Remick and Dante Palumbo each scored two goals for the Lions in the first win. In the overtime game, Remick scored the game-winner, while Palumbo and Jake Kraft also had a goal. Canterbury goalie Peter Papadopoulos made 48 saves in the 3-2 loss.

* KUA picked up a pair of wins over New Hampton, beating the Huskies 3-1 with goals from Bryce Bollman, Jaiden Moriello and Adam Cardona, and also 8-3 with a pair of goals apiece from Moriello and Liam Walsh, a goal and two assists from Thomas Pichette, and a goal from freshman Kyle Murray-Smith.

* St. Paul’s notched a pair of wins over Holderness. Jake Sullivan and Cooper Flinton had two goals each and Sam Sibold and Mick Frechette one in a 6-4 victory. Jake Boulanger scored twice for the Bulls, with Cooper Boulanger and Jake Waterman added a goal apiece. St. Paul’s also took a 4-2 decision as Sibold and Owen Stadheim each contributed a goal and assist. 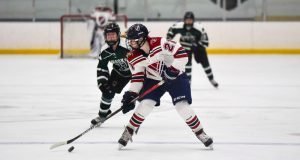