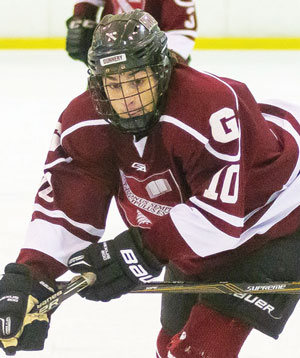 * Gunnery got a pair of goals apiece from Zach Pellegrino and Albert Washco in a 6-2 win over Canterbury. Marc Gatcomb and Niko Ioannou each had a goal for the Highlanders.

* Holderness got goals from Kevin Pitts, Harley Michaels and Isaiah Fox in a 3-3 standoff with Vermont Academy in Lakes Region action. Calvin Moise had a pair of goals for the Wildcats. 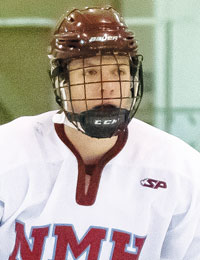 * Two goals each from Kevin Wall and Ilya Usau helped Salisbury stave off Deerfield, 6-5. Brendan Willetts and Chris Brown each scored as well.

* Kyle Kazeroid and Devan Tongue each had five-point games to power Northfield Mount Hermon to a 8-3 win over Worcester Academy.

* Trinity-Pawling continued its solid start with a 3-1 win over Westminster. Scott Lawson, A.J. Bella and Nolan Laplante lit the lamp for T-P, which improved to 5-2-2.

* Kevin Quinn and J.J. Fecteau each had a pair of goals in Albany Academy’s 6-2 conquest of Lawrenceville. Sean O’Gorman and Joe Pasquini also scored for the Cadets.

* Berkshire was able to tie Williston 2-2 thanks to goals from Brooks Gammill and Jesse Lycan. Gamill and John Pratt had the goals in the Bears’ 2-1 win over Millbrook.

* Brendan Sjostedt and Tae Lee each had a goal and assist, Cam Weitzman chipped in with three assists and Sean Keegans had the shutout in Tilton’s 5-0 whitewashing of Wyoming Seminary.

* Winchendon had an impressive 6-1 win over Gunnery as Ryan Black led a balanced attack with a pair of goals. Matt Fawcett, Justin Alves, Matthew Rickard and Danny Cavanagh also had goals in the win.

* Two goals from Brad Shaw and singletons from Lynden Breen and James Hatzepetros powered New Hampton to a 4-2 win over Governor’s Academy.

* Kents Hill picked up a pair of wins, downing NYA 7-0 as Frank Vitucci had a hat trick, and then besting Pingree 7-3 with Nick Garneau‘s two goals and two assists leading the way.

* Henry Muller had two goals and Phil Tresca notched the game-winner as Rivers edged Proctor, 3-2. Shane Sullivan and Aidan Torres had the goals for Proctor.

* St Sebastian’s picked up a key 5-2 win over Belmont Hill as Liam Gorman had the hat trick, and Tommy Lyons and Riley Hughes added single goals.