* Lawrence Academy held off a furious Dexter Southfield third period rush and took home the Watkins Tournament title with a 5-4 win, avenging its only loss of the season to date, a 3-1 setback in the finals of the Lawrence/Groton Tournament. Riley Duran scored a pair of goals for the Spartans, who also got goals from Kyle Furey, David Sacco and Conor Lovett. Doug Grimes had a pair of goals for Dexter Southfield, which fell to 11-1-0 overall. 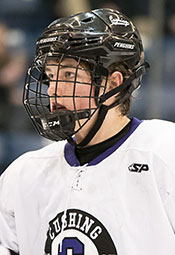 * Kyle Tomaso‘s two goals led Pomfret to a 5-1 win over Tabor to win the Joshua Weeks Tournament. Tyler Bourque, Hans Forselius and Jack Hughes each had a goal in the win for the Griffins.

* Goals by Lukas Gustaffson, Cody Sealey, Jackson Dorrington, Nolan Hayes and Nick Rheaume powered Cushing to a 5-1 win over Thayer in the Watkins Tournament third place game. Gustaffson had a pair of goals in Cushing’s 6-3 victory over Canterbury.

* Jakub Teply, Harry Tavlarios, Conner Welsh and Beanie Richter each scored in Brunswick’s 4-0 whitewashing of Rivers. Teply then had the lone goal in Brunswick 1-0 win over host Belmont Hill in the title game of the Belmont Hill/Nichols Tournament.

* Will Elias had two goals and Nolan Joyce, Brendan Dumas, Connor Joyce, Liam Connors and Tom Messineo each had one as St. Sebastian’s cruised past Berkshire 7-0. 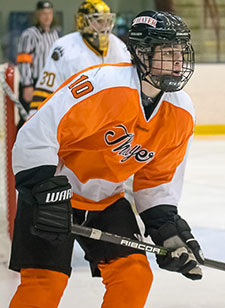 * In Thayer’s 4-2 win over Governor’s Academy, Sasha Teleguine notched a pair of goals. Joey Kramer and Mike Stenberg had single tallies for the Tigers.

* Cald Cox scored two goals and Cooper Flinton and Joe Schubert each had one in St. Paul’s 4-1 decision of St. George’s.

* Lawrence Academy slipped past Cushing, 3-2, in overtime on Holt Oliphant‘s second goal of the day.  James Broderick had the other goal for the Spartans.