* Lucas Mercuri had two goals and Matt Coronato, Clay Korpi, Jake Quillan, Matt DeBoer and Justin Hryckowian each had one as #1 Salisbury turned down Taft, 7-1. 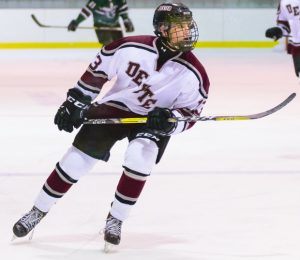 * #4 Dexter Southfield wore down New Hampton in an eventual 4-1 win that was close throughout. Jack Dempsey, Patrick Morrissey, Ben Raymond and Kevin MacKay each had a goal.

* Tyler Young scored two goals to lead #2 Lawrence Academy to a 5-1 win over Thayer.  Holt Oliphant, David Sacco and Ethan Bastien all scored as well for the Spartans.

* Two goals from Tyler Gaulin and single tallies off the sticks of Connor Derby, Brady Desjardins and Paddy Condon powered Berwick Academy to a 5-2 win over Hebron.

* Holderness surprised #6 Tilton 6-3 led by a hat trick from Isaiah Fox. Tim Manning had a goal and three assists and Kevin Pitts a goal and two assists in the win.