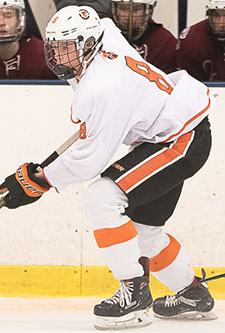 * Kimball Union found itself down 3-0 in the first period on the road to Governor’s Academy but the Wildcats roared back for 4-3 overtime win. Sullivan Mack‘s third goal was the game-winner in extra time. Paul Dore also had a goal and Zak Brice made 34 saves.

* Casey Severo and David Jacobs each had a goal and Mark Smith was tremendous in goal to power Nobles to a 2-1 win over St. Sebastian’s in the Keller Division.

* Dexter Southfield rebounded from a loss to Lawrence Academy with a solid 6-1 win over Rivers. Doug Grimes led the offensive attack with a pair of goals. Cullin Wilson, Johnny McElaney, John Fusco and Matt Fusco all scored as well for Dexter.

* Two goals from Isaac MacLeod and one apiece from Marcus Joughin, Jack Ring and Will Hilfiker gave New Hampton a 5-1 conquest of Brewster Academy.