It was a crazy Wednesday in Boys Prep School hockey, with three of this week’s top four teams in the HNIB News Top 15 falling short.

* #2 Gunnery fell at home, 5-4, to Millbrook. The Mustangs Kyle Neudorf notched the game-winner with 45 seconds left in regulation.  Jake Gagnon had two goals for Millbrook, while Jason Ruszkowski and Ethan Cott each had one.

* 3 Avon Old Farms came out on the short end of a 4-2 score against Northfield Mt. Hermon. The Hoggers got goals from Michael Dunderdale, Colin Hedge, Noah Heisler and Jack Quinn in the win. Goaltender Connor Hasley had 37 saves. 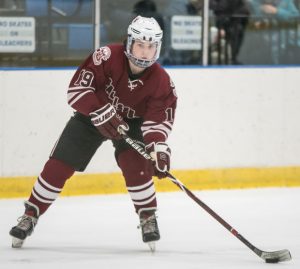 * Deerfield got two goals from Mikey Holland and one apiece out of Will Holland and Sasha Shogren in a 4-1 victory over #4 Kimball Union, snapping the Wildcats eight-game winning streak.

* Pomfret bounced Worcester Academy, 4-1. Tyler Mitchell, Ryan Saunders, Tyler Bourque and Sami Hakkarainen each had a goal for the Griffins.

* #6 Tilton pulled away in the third period for a 5-2 Lakes Region win over Brewster Academy. Jack Seymour finished with two goals, while Cam Ryan and Tae Lee each had a goal and assist.

* Drew Burke had the hat trick in Groton’s 6-2 win over Governor’s Academy. Henry Hodde, Will Torriani and Eamon McNamara all scored once for the Zebras.