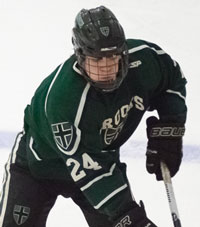 The Bishops struggled a bit last winter, and look this year to find a way to score more goals and improve special teams play.

Up front, returning senior Colin Volishin and juniors Stephen Higgins and Parker Sondag will be a key trio offensively for coach Dave Ries. New sophomore Michael Bencivengo will have an immediate impact, as will newcomers Michael Herrera (junior) and Jake MacKinnon (sophomore).

A triumvirate of seniors – Owen Borek, Michael Hughes and Mitch Nenninger – will be asked to handle the big duties on the Brooks blue line.

The Bishops will have the luxury of returning a pair of varsity-tested goalies in senior Spencer Pierce and sophomore Jon Carafotes.

New head coach Chris Nagy will have this squad in rebuild mode, as he takes over a program that features just two seniors, and a host of younger players that will be the cornerstone of the program going forward. “It should be an interesting dynamic,” Nagy said. “Team defense will be of the utmost importance, as will special teams.”

On defense, junior Quinn Serpa and sophomore Tim Donovan will get key minutes in front of the Knights’ other senior – returning goaltender John Day.

Amongst the host of newcomers looking to make their mark are C.J. Beals, Jack Rorick, Thomas Sheft and Shane Taddia.

A solid group returns for coach Bill Riley, a group that he says are hungry and excited to compete. Riley also expects this unit to have great senior leadership.

There is some firepower up front for the Zebras, led by three very capable seniors in Jonah Gold (39 pts), Drew Burke (30 pts) and Will Torriani (29 pts). Junior Marc Borghi will be a key contributor, while sophomores Ronan Doherty and Aidan Garcia should have bigger roles. Keep an eye on new junior Gabriel Lamothe.

Senior rock Brandon Slawaska, a solid 6’2″ 210 rearguard, will be huge on defense. Sophomores Trey Whitehead and Thomas Dempsey are new to the program and look to contribute right away.

In goal, sophomore Tristan Mecenas is back. He saw the majority of minutes in goal last winter as a ninth-grader.

Veteran coach Joe Mallen will have an experienced club this winter, one that should be tough on defense and looking to improve offensive production. 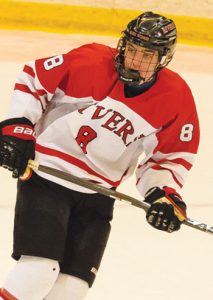 The Zebras will have one of the top goalies in prep school hockey with the return of senior rock Joe Stanizzi, who fashioned a 2.65 gaa and .936 save percentage last winter.

The Red Wings lost four of their top five scorers and one of prep school’s premier netminders in Aidan Porter from last winter’s juggernaut that lost just two games all season. But, don’t expect Rivers to backslide much at all. There is still plenty of talent to go around.

Junior Phil Tresca, who has committed to Yale, will be a catalyst on offense for coach Shawn McEachern. Also back and ready for bigger scoring roles are senior Rory Casey, senior Henry Muller and junior Johnny Kantaros. New sophomore Coleman Nee joins the group.

New junior Casen Jenko will be in the hunt for the vacated spot in goal for Rivers.

It will be strength from the goalmouth out for the Foxes, who boast a seasoned goaltender and an experienced group of defensemen that will be the backbone of the team.

The offense will be pretty solid, too, with the likes of seniors Jack Luca (37 pts) and Aidan Lovett (19 pts) powering the way. Junior Joey Ryan (17 pts) and sophomore Bobby Luca (21 pts) are two more solid options up front for coach Dave Cataruzolo.

Senior Kevin Demore, junior Dante Cuzzi and sophomore Peter Frates are the solid trio on the blue. Junior Mikey Jones (2.90 gaa) does the job in goal for Roxbury Latin.

Increase offensive production will be huge this winter for the Dragons, who have struggled to put the puck in the net the past few years. “Improved offensive play will allow our defensive game to breath a little bit,” said coach Jeff Dwyer.

Sophomore B Jenkinson led the team in scoring as a ninth grader and will spearhead the attack with junior Michael Dimascolo. Two seniors – Matt Tartaglio and Zane Cowans – should see a lot of minutes up front. A couple of freshmen looking to open eyes are Matt Kursonis and Jack Almeida.

A defensive cornerstone will be junior Dima Puskin. Freshman Ryan Buckley looks for a big role. Junior goalie Gianni Rodriguez is primed for a big season.

With some depth at both forward and defense, the Lions have some potential to be a very good club. A key will be finding a replacement for workhorse goaltender C.J. McKennitt, who has graduated. “If we can be a little more unpredictable in our scoring and capitalize on our power play chances, we could have the chance to be successful,” said St. Mark’s coach Carl Corazzini. “We need to be a tighter knot defensively.”

On defense, the Lions boast the likes of senior Nolan Moore (27 pts) and junior Tucker Hartmann (27 pts), both of whom get very involved in the offensive end of the ice as well. Sophomore Ian Moore (14 pts) is another key blueliner, as is sophomore Jake Oblak.