Berwick Academy (10-16-0) welcomes a new head coach in Jeoff Jarnot, who in the absence of depth at forward, will rely on some solid defensive play to lead the way for the Bulldogs.

Junior Byron Welch (15 pts) will be key cog up front, as will junior Derek Muse. Senior Anthony Cosentino can play well at either forward or defense.

On the blue line, seniors Keith Jordan and Sam Twombly will be cornerstones for Berwick, in front of post-grad goalie Matt Kenneally, out of Rhode Island’s Bishop Hendricken HS.

Once some of the new young players get up to speed, then Cushing (25-4-4) should be a pretty strong group as the Penguins aim to qualify again for the New England Elite Tournament.

On defense, coach Rob Gagnon will look for leadership from seniors Matt Dillon, Ethan Roswell and Ben Barton. They will hold down the fort in front of goaltenders Joey Halstrom, a junior,  and Gavin Dykeman,  a senior.

Dexter (20-6-5) advanced all the way to the New England Elite title game last winter. To even think about getting there again, the team will need to replace the offensive production lost and get solid goaltending.

Coach Dan Donato still has a bevy of weapons up front, led by senior Patrick Daly (54 pts), senior Kevin Hock (36 pts) and senior Jack Donato. Sophomore Jay O’Brien, recently committed to Providence,  had a production freshman campaign a year ago. Newcomers looking to blend with this group include John Femia, a junior, and sophomores Jack Halloran and Jack Nesbit. 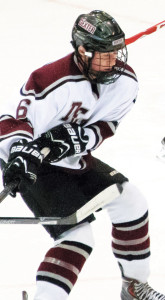 Who emerges as Dexter’s starting goalie will be a key for the squad.

There is optimism at Hebron (15-11-4), where the Lumberjacks have a nice mix of returning veterans and new faces. Special teams were a strength last winter and project to be again this year.

At forward, senior Ryan Boucher (22 pts) will be a go-to scorer for coach James LeBlanc. Joining Boucher will be post-grad Dominic DeRosa and juniors Phil Gilmour and Erik Friberg.

Post-grad Colin McKay (9 pts) and sophomore Sean Kimura (14 pts) are key holdovers on the blue line. New junior Steve Tettoni will be an added plus.

Post-grad Zach Robbins will be in the mix for the starting goaltender’s position.

Second-year coach Doug Friedman has bolstered his roster with an influx of players, giving Kents Hill (9-19-0) some much-needed depth as they aim to improve.

Senior Joel Pottruff (15 pts) is a solid two-way rearguard. Post-grads Sean Holly and Tim Tierney will we welcome additions to the blue line.

In goal, senior Bill McLaughlin expects to have another excellent year between the pipes.

New head coach Paul Tortorella is excited to get the season going at Phillips Andover (8-15-3), where he anticipates a team that will have more depth this winter.

Key elements up front for the Big Blue will be senior Collin Nugent (39 pts) and senior Tyler Levine (35 pts). Post-grad Billy Stahley, and new juniors Jonny Edelson and Kevin Kastholm (both from Illinois) will be counted on offensively as well.

Between the pipes, post-grad Matt Schoen from Connecticut will fight for time.

Graduation took a big bite out of the offense at Phillips Exeter (24-4-2), where 95 of last year’s 135 goals scored have moved on. So, the forward group as a whole will need to step it up. Having seven experienced defensemen back will help out.

There are some forwards back, namely seniors Devin Moore (30 pts) and Ben Solin (30 pts), along with juniors Brad Ingersoll and Colin Shapiro. Coach Dana Barbin has replenished the forward ranks with the likes of post-grads Ryan Petti, Christian Thompson, Steve Upton and Matt Brooks, and juniors Ryan Moore and Matt McShea.

On the blue line, senior co-captains Trevor Cosgrove (28 pts), a Colgate recruit, and Peter Christie (13 pts) will be the cornerstones. Both are 4-year varsity players. Other seniors back on defense are Jordan Haney, Derrick Spencer (Williams) and Jacob Dupont.

In goal, senior Nick Moore and post-grad Joe Lazzaro will team up to get the job done for the Big Red.

Keep An Eye On Experienced Tabor

A battle-tested senior class, with multiple four-year varsity players, will lead Tabor (14-11-4) as the Seawolves look to grab a post-season berth.

Senior rock Michael Ryan, a Union recruit, will be the key component on the Tabor blue line and will get some help from new junior Brendan Casey.

A starting goalie will emerge from pre-season workouts.

With some good speed up front, Winchendon (11-13-2) will look to compete for a playoff spot.

Up front, look for senior Anthony Scarcella (28 pts) to be a focal point for coach Jarrett Sampson. He leads a returning group that also includes sophomore Ben Thomas (21 pts) and seniors Maxim Cote (15 pts) and Matt Chisholm. New guys to keep an eye on are juniors John Mulera (a Providence college recruit), and Mike Hardman, and sophomore Matt Fawcett.

Looking to make an immediate impact on defense for Winchendon are junior Brian Scoville, who has committed to UMass-Amherst, and sophomore Dante Vasconcellos.