When the MIAA Girls D1 Final was cancelled last March, it left Austin Prep and Woburn as co-state champions for Division 1. Here is a look back at their semifinal wins..

Austin Prep  rallied to beat third-seeded Braintree, 2-1, in one semifinal, while the Tanners blanked eighth-seeded Boston Latin, 2-0, on a pair of goals from freshman Angelina DiGirolamo in the other. It would have been a fantastic state final to say the least.

In the first game of the semifinal doubleheader, Austin Prep found itself down 1-0 to Braintree, a team the Cougars also beat 2-1 during the regular season, entering the final 15 minutes of play.

But, Isabel Hulse got Austin Prep on the scoreboard early on in the stanza, burying a shot after a nice feed from Monique Lyons to make it a 1-1 game.

And with 1:42 left in regulation, the Cougars got the game-winner when sophomore forward Sabrina Axelrod was in the right place at the right time, tipping home a shot from senior captain defenseman Frankie Frelick.

“There were no words to describe that,” said Frelick. “I am so proud of the team. We put it all on the ice and I didn’t doubt it for a moment that we weren’t going to pull it off. It feels amazing going to the Garden my last year of playing hockey ever. It is a great feeling and I wouldn’t want to do it with any other team.”

“We have a half-and-half mix of young kids and upperclassmen and I thought in the second period we really turned it on especially towards the end. We were starting to get a lot of pucks to net and good zone presence,” said Austin Prep coach Stephanie Wood.

Braintree came out firing right from the start and Austin Prep goalie Lauryn Hanafin was busy early on. After dominating most of the first period play, the Wamps came through with the game’s first goal to take a 1-0 lead. At 13:40 of the period, Delia Lee sent a pass across to Allie DeCoste, who from the point fired home a wrist-shot giving the Wamps a 1-0 lead.

In the second period, Austin Prep had the better chances in the period, but Braintree goalie Ellie Foley made some key saves late keeping the Cougars off the scoreboard.

Austin Prep had one last period to make some magic happen and they did just that.

“In the third period before we hit the ice, we decided this was not going to be our last game,” said Wood. “I am extremely proud of our kids battling through going in the third period down a goal and we have been waiting a full year to get back to this position.”

“So this was a big hurdle. We knew this was going to be one of our tougher opponents we saw all year and we knew it would be extremely tough right down to the wire,” Wood said. 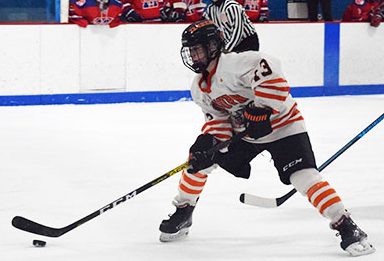 In the second game, both teams came out strong in what was a fast-paced first period. Both Woburn and Boston Latin had some good early chances but Woburn goalie Amanda Essigmann and Wolfpack goalie Ellen Linso were on top of their games.

With a little over a minute to play in the first period, Angelina DiGirolamo made a nice play along the boards, grabbed the puck and came up the right wing and fired one past Linso to give the Tanners a 1-0 lead.

Early in the second period, Boston Latin was applying some offensive pressure,  getting six good shots off where Essigmann was there to keep her team in the lead.

“Amanda [Essigmann] was terrific as she has been all four years that she has been here,” said Woburn coach Steve Kennedy. “All the seniors have taken it through now and Amanda is a big part of that and so are Erin McComiskey and Jackie Lees.”

At 8:34 of the second period, DiGirolamo scored her second goal of the game,  short-handed. McComiskey made a beautiful pass to DiGirolamo, who broke through the Boston Latin defense, went in on a breakaway and scored giving Woburn a 2-0 lead.

“Two games in a row Angelina has a scored a shorthanded goal,” said Kennedy. “For her, the more space out on the ice the better and she is not afraid to be aggressive. When the opportunity is there she knows how to seize it and that is what she was able to do. To say she is a special player is not doing it justice. We are very fortunate to have her and she comes through for us time and time again.”

A little over two minutes into the third period, Woburn defenseman Jackie Lees left the game after going down hard along the boards. Coach Kennedy was proud of his team for rallying behind her and staying focused.

“It was a tough night with Jackie going out,” said Kennedy. “It was a hard-fought game up until that point and once that happens the momentum stops. Both teams have to re-set and you never know where the emotions are going to be. Our kids showed some great mental toughness to the finish the game out. That is a team that really loves each other in there.”

Woburn was able to finish the game out strong despite a late push by the Wolfpack and know they have a big challenge up ahead of them.”